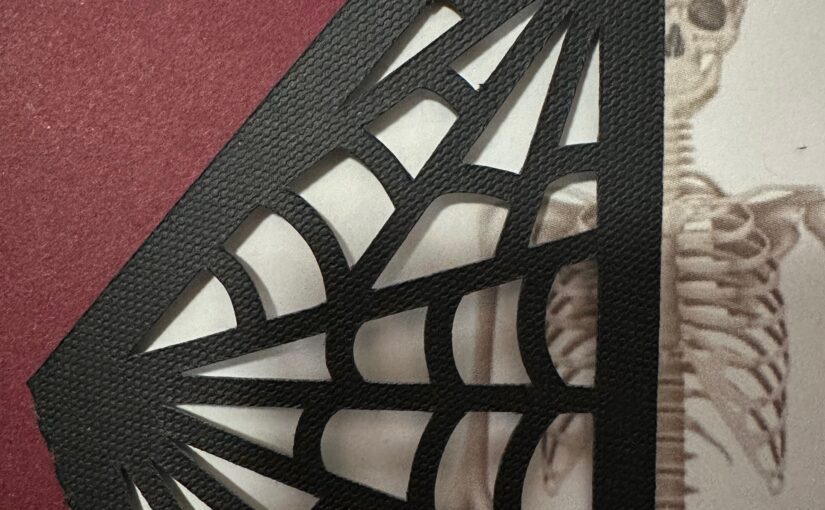 Before the pandemic, Christine and I would regularly host a Potions Party around Halloween. This was always an extravagant affair and took a lot of work. With people feeling more comfortable with the pandemic situation, we thought we’d host a “lite” version of an Octoberween party — not as excessive as the Potions Party, but themed and decorated, with special drinks and special activities. Because Bonfire Night fell on the Saturday after Halloween, we thought we’d put together a Guy-Fawkes-themed goth-victorian party.

The cascade of project ideas (which you’ll see in upcoming posts) started with invitations. We wanted something appropriately goth and elegant. Looking around Etsy, we found a beautiful spiderweb invitation design available to download as digital files. I bought it, knowing it probably wasn’t going to work on my CNC cutter without modification, due to both the size of its bed and the size of the fancy paper I could get. I played around with ways to split it into multiple pieces, but each result seemed too inelegant.

I decided to come up with my own design, using a similar spiderweb flap, but in coffin form. I started by prototyping the overall shape and size of both the outer coffin wrapper and the invitation insert.

From there, I added the spiderwebbing. I made mine a lot thicker than the Etsy version, just to make it easier and less delicate. This helped with the CNC cutter and also eased the manual labor of pruning out the discarded bits.

After defining the shape of the insert and purchasing a stock-art skeleton, we went to work on the wording.

With the wording out of the way, it was time to manufacture and assemble.

I had recently recreated a Ouiji board design from scratch, as an Affinity Designer document (a vector program similar to Illustrator). I figured this might make a fun template for the RSVP card, so made some slight tweaks.

And at that point, I had a wild idea. Since the coffin wrapper is a vector file, I could scale that up to any size. Back during the Potions Party, I’d come up with a laser-cut and stitched together silhouette of Hogwarts castle for the front window. I did a similar thing for a Black Live Matter full-window decal. So this was a technique I’d gotten down well.

I measured our front doors, did a little math, and sliced up the coffin door design into segments that fit in my laser cutter.

The next steps were cutting, assembly, and painting.

The fit isn’t perfect, and it’s a little subtle with the distraction of a party all around, but I think it worked out well.

Overall, the invitations (and party) were a success! The door cutouts are still on the door to this day.