Skip to content
This page is part of the Netninja.com Hipster PDA templates. For more templates see the index of Hipster PDA pages. For details about how I use these templates in my everyday life, look for posts tagged "hipsterpda."
The blank Sudoku grid was one of my first tem­plates.  It has gone through sev­eral revi­sions, both with and with­out light “guess num­bers” in each square. 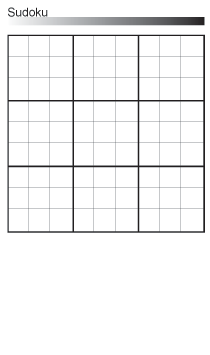 This is a card with a blank Sudoku grid on the front and back. After printing, fill it with puzzles from your favorite source. I use Sharpie markers to make the “pre-printed” numbers good and bold.

I am discovering that many consumer printers just won’t handle fairly exact printing. Based on how the paper in the paper tray is aligned, how much paper is in the paper tray, local fluctuations in gravity, the phase of the moon, and your state of mind, consumer printers can be as much as 1/8 to 1/4 inch off. This means that the above template really won’t work too well unless you are really careful. Although the pattern itself is perfect, printing double-sided does not always work out right, with the fronts and backs being misaligned so much that you end up slicing off part of a grid. I have revised the blank Sudoku grid to a 2.5″ square (as opposed to the 2.75″ square, above), which fits on a 3×5″ card with enough margin for printing/cutting error. 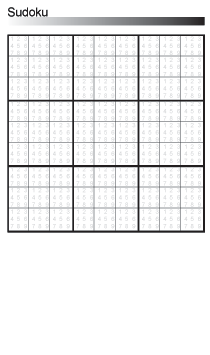 This card is exactly the same as the above one, except that there are faint numbers, from 1 to 9, in each grid space. Some people have found that this card works slightly better than the plain sudoku card. If you know that a number is specifically not in a given square, you can lightly cross it out. When you finally know the actual number for the square, you can write it in with a stronger pen stroke. 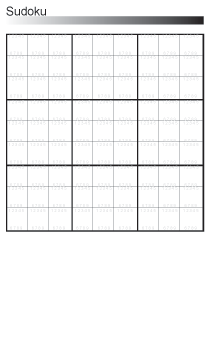 This is a slightly different take on the above “numbers” card, with the numerals 1..5 along the top edge of each square and 6..9 along the bottom edge. They are kind of difficult to see in the preview image, but they are there. It is the same concept as the above “Sudoku-Numbers” card, but a slightly different style. You can either cross off the numbers that are certainly not in a given square or circle the numbers that are, depending on your style.