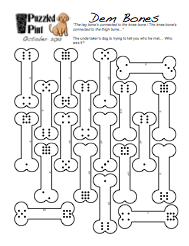 Notice: This blog post is a peek behind the curtain to reveal the design of and thought process behind a Puzzled Pint puzzle.  It contains spoilers about said puzzle. If you were at the October 2012 Puzzled Pint (“Dogtober”) and saw the puzzle, then you’re good to go. If you have not yet seen the puzzle then I would suggest going over to the archives, download “Dem Bones,” print out a copy, and try to solve it on your own before proceeding. Or if you don’t want to spend much time trying to solve it, at least pull it up on your screen and formulate a couple of solve strategies. It might be helpful to have a copy of it handy when you continue reading.

Like many of the great ideas in history, the underlying concept for this puzzle came to me in the shower. We had planned on October being dog month, but I also wanted to pull a Halloween theme into my puzzle. I had mulled over a few possible ideas, none of which were terribly solid or inspirational, but then it hit me. Another word for dominoes is bones. In fact, the thought hit me hard enough that I leaped from the bathroom, dripping wet, to write that phrase in my notebook.

Many “The Game” style puzzle solutions stem from converting numbers into letters. Dominoes, of course, are nothing but numbers. Either I could take each individual number (from 0..6) and make it a letter or I could use the sums (0..12). With the first idea, I would end up with the letters A through F — if you throw away the zero because thinking like a programmer and using base-zero upped the difficulty level beyond a fun evening of puzzles and beer. With the second idea, I would end up with a much more promising range of A through L. That’s nearly half the alphabet.

I thought I would maybe turn each domino into a letter and string them together according to standard domino pip-matching rules.

This scheme would give me words containing only the letters A..L. I pulled words from the Scrabble dictionary (as opposed to the standard Unix dictionary – see my earlier post on Unix dictionary comparisons for more detail). The Unix command to do this looks a little something like this:

This brought back a list of about 1700 possible words. I find longer words are more interesting than short ones – “kicked,” “baggage,” and “defiled” versus “cat” and “big” – so I sorted by word length:

I then got to work finding interesting combinations of words to make a phrase or question. I was a bit fond of the word “fleabag.” It did not totally feel like a satisfying answer, but it was one of the best themed answers within the constraints. There were actually several not-quite-within-the-letter-constraints words like “fido,” “dog,” “light,” “hand,” “joke,” and “gave.” I had a brief thought of using the zero-pip domino as either the letter O or as a wildcard but really wanted to avoid that if I could. It felt more of a hack than a satisfying puzzle element.

I thought I would start with the phrase “fleabag” and encode it using matching dominoes. I believe I might have had another word or two in there, but at this point I had moved to a spreadsheet that I have since overwritten. It turns out that bouncing between large and small numbers in the number line either gives you too few pips left over (if the following letter move is short) or way too many (if the move is long). My spreadsheet for “fleabag” looked a little something like this:

In this case, the L must be the 6/6 boxcars. This leaves us with too many pips on one side for the next letter. That E has a value of only 5, so would need a negative one on the other side. Basically, this scheme has too many interlinked dependencies to be a good general-purpose encoding mechanism. I could probably write a program to constrain the word list even further, to those that were possible to implement using this scheme, but the word list felt a little short to begin with.

I thought I could perhaps apply a “patch” to each domino. If I was off by a pip or two, I could put a “+3” or “–1” to skew the count a little. But if I were to do that, why not use really large numbers like “+20” to reach parts of the alphabet beyond 12? Then, I could totally throw away the A..L constrained word list and use any word or phrase I wanted. This felt both liberating and satisfying, so I built up the puzzle.

I built up a message and the corresponding dominoes with modifiers. I also put together the initial graphic design, which I did not deviate far from in the final version. I made the dominoes “ambidextrous” in that there is no rightside-up or upside-down, meaning there is no specific or enforced left-to-right order when combining them. I felt this would add some more anagramming possibilities, though did not stop to think that the extra combinations are calculated with a factorial. It also did not help that there were a large number of similar pips and that the resulting message included a rather long, non-obvious, non-dictionary word. One of the other Puzzled Pint Game Control team members looked at this version, but I had dropped it by the time it got to formal playtesting. 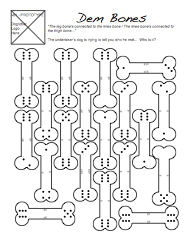 The Easy Version Which Was Also Too Hard

The updated version I had tagged as “easy.” I only put the modifier on one side of the domino, giving it a clear up, down, left, and right. This forced a left-to-right reading order and limited the crazy number of ambidextrous connections to a still-large number of possibilities.

During playtest, it took a good satisfying amount of time to hit the “a ha” moment. Unfortunately, once the mechanics of how the letters fit together was known, there was still a large number of combinations and the middle word (“Skellington”) didn’t lend well to anagramming. It quickly led from “a ha” to frustration. There was also some question about how the double-six worked. In a traditional game of dominoes, doubles get played as a spinner: rotated 90 degrees, allowing four dominoes to play off of it instead of just two. 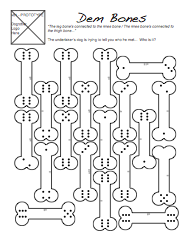 Based on playtest feedback, I revised the “easy” version. The biggest change was extending the dominoes from having a maximum pip count of 6 to a max count of 9. This allowed for more specific and unique combinations. I made the first couple of letters and last couple of letters combine with no ambiguity. I also more evenly distributed the pip counts of the middle letters so there were not so many duplicates (the “easy” version had lots of sixes). I also subtly used the zero-pip connections as word delimiters. Since we the GC team had been spoiled by the previous round of testing, there was no clear way to quantitatively check that this mechanic worked better (at least, not without pulling in a few guinea pigs), but we all agreed it felt much better. The true (and final) playtest would happen at puzzled pint.  From what I could tell, it turned out pretty well.

I would love to write a regular feature on puzzle design.  Some of the deciding factors include whether there is interest, whether I can scrounge up the monthly time to write about puzzle design in addition to designing puzzles for Puzzled Pint, and whether those puzzles are worthy of discussion.  I rather liked this one and thought it had an interesting backstory.  My puzzle from the previous month was less interesting.  My puzzle for next month might be interesting to discuss, but certainly not as interesting as this one unless I discover major revisions are necessary.  The best I can say is watch this website for future updates, paying close attention to the “puzzles” tag.