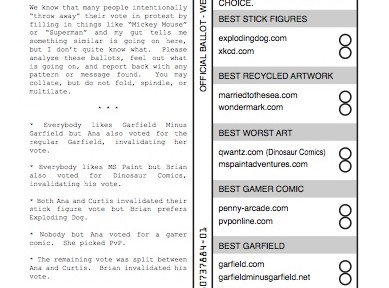 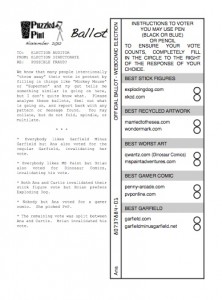 Notice: This blog post is a peek behind the curtain to reveal the design of and thought process behind a Puzzled Pint puzzle.  It contains spoilers about said puzzle.  This is the second post in this series.  If you find it interesting, you may want to look back at “Dissecting puzzle design: Dem Bones.”  This particular post is about a puzzle that became a bonus puzzle during the November 2012 Puzzled Pint (“Webcomics”).  If you were at that Puzzled Pint, you’re good to go.  If you have not yet seen this puzzle, then I highly suggest going to the archives, download “Ballot,” print out a copy and try to solve it before proceeding.

This puzzle came to me while thinking about the Oregon ballots (they’re all mail-in) and Scantron answer sheets.  The fill-in bubbles by themselves make good pips for things like Braille.  I wanted to do something like that, but not a straightforward fill-in-the-pips-and-see-the-answer-directly sort of thing.  I thought maybe I could make it a bit more three-dimensional.  I had already done a puzzle for the month, though, so didn’t want to spend a lot of time on it.  This, coupled with the easy difficulty, is exactly how Ballot became a bonus puzzle; my other puzzle was finished and tightly coupled with the webcomic theme.  We had all the other puzzles for the month.  This one was thematically coupled to November and elections, so would have been hard to save for the next month.  (Admittedly, we could have held it for a year, but…. really?)

My original thought was to have two Scantron-like ballots that the puzzler fills in.  Each would have three (or more) options for each question.  She would then stack them and offset one from the other a bit to see all the dots.

I really liked this scheme, but there was an encoding issue.  If you were to legitimately fill out the bubbles, you could only have zero or one pips in each Braille column.  That severely limits the letter choice: four letters, specifically.

I thought I could then rotate things a bit.  If there were two answers per question and three answer sheets, I could get away with one pip for each row. 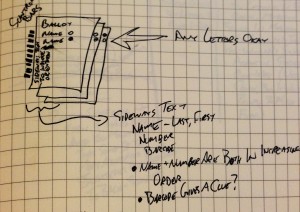 That gave me a larger, but still limited letter set.

At this point, I knew I had to break the rules and allow more than one answer filled in.  That, in turn, led to the flavor text about dissident protest votes — people intentionally marking ballots with invalid marks to throw away their vote with an attitude.

At that point, I made the first and final technical draft.  There was one non-technical draft that fixed a typo and removed barcodes to simplify the presentation.  The early draft had barcodes (holding the same data as the serial numbers), which were just there as graphical design elements to spice up the look.  You can see them in the answer key:

When designing puzzles, you have to look at things from the point of view of the solvers.  Given an element, how could you interpret it?  There is the official way, yes, but there may be alternate interpretations.  You might intentionally put ambiguities in interpretation there to increase difficulty, but often they are unintentional.  I hadn’t thought there could be an alternate interpretation of braille, but one team came up with an interesting near-solve.

One team didn’t rotate and translate to braille, they looked at the filled-in circles as numbers: 0, 1, or 2, depending on how many were filled in.  That conjures up the idea of trinary (or ternary, base-3).  They then read the digits across as a ternary number, starting from the bottom of the ballot, working toward the top: 112:N, 001:A, 121:P, 121:P, 212W.  They thought that maybe they messed up the last one and the answer was “nappy.”  It’s a great, creative solve and nothing that anyone in Game Control thought of, but unfortunately was not the answer.

Of course you found it, right?