Yesterday, Black Friday, was a wonderful and relaxing day.  While the rest of the world pitched tents in front of Best Buy, queued up at Wal-Mart in the wee hours of the morning, and generally went crazy being consumers, Kim and I did nothing.  Well, obviously we did something, but we didn’t leave the house in so doing.  And I don’t mean “didn’t leave the house” like “didn’t leave the property, but still puttered around outside.”  I mean it like “the front door didn’t open and the back door only opened to let cats in and out.”  No going outside to fill bird feeders.  No going out to take out recycling, compost, or trash.  It was a great day of coffee, tea, movies, ploughman’s lunch (for dinner), and leftover milk punch.  We watched Brave, Suspiria, and Moonrise Kingdom.  The milk punch was from the Thanksgiving of Pies the other night (sweet, savory, mostly vegan, but nothing that was not a pie) and I would link to a recipe, but no recipe I can find appears to match this one. 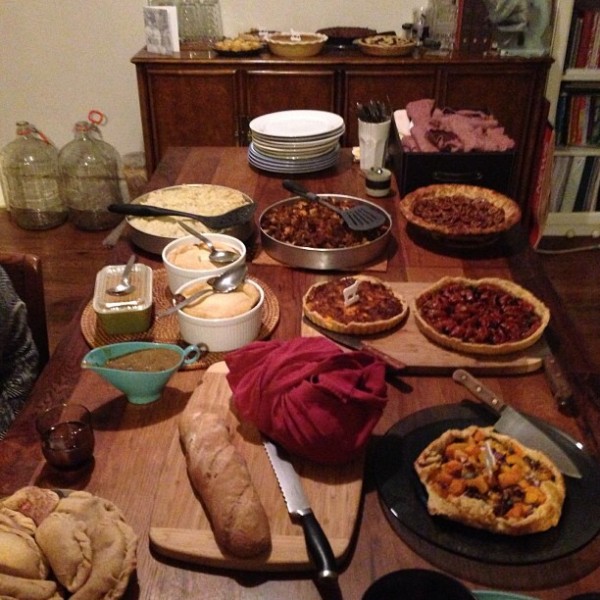 The internet seems to think the milk punch recipe begins with “take some milk, add some bourbon….” The recipe that @wurmouroboros followed started more like “first, make some cheese….”  If you’ve ever made paneer (which I am now reminded I haven’t made in years), the whey you squeeze out and typically discard is the basis for this milk punch.  Based on the name, you would expect the drink to be white and milky, but it’s clear, like the whey.  A touch of bitters makes it pinky-red in tint, but still transparent.

Overall, I believe that “Do Nothing Day” was a success.  It’s a tradition that I think I will continue.  Today, though?  I have a ton of stuff to do.

Full disclosure: Although I did not leave the house, I did participate in consumer culture.  I ordered a few things online, one of which is a Christmas present.