Blah. Long day. The EEPROMS in my lasers are somewhat illegible.

Something has been bugging me since it first entered my head a few weeks back. We all know that vampires do not have reflections. Pop-culture (and not-so-pop-culture) movies, television shows, and stories show us that not only vampires, but also their clothing, are invisible in mirrors. If it were otherwise, we would have stories with vampires casting H.G. Wells’ Invisible Man reflections in mirrors. The problem with this particular law of vampiric nature is that there is a strange boundary condition. Consider this thought experiment. You are standing behind a vampire and there is a full-length mirror in front of the both of you. The vampire is about to leave the house, but is not yet wearing a jacket. You can see yourself in the mirror, but not the vampire. Somebody out of your field of view tosses a jacket to said vampire. What do you see? You obviously see both the jacket and reflection of the jacket as it arcs through the air. As the vampire catches and dons the jacket, what do you see? At some point the jacket becomes invisible in the mirror or you have the Invisible Man scenario, right? Does it disappear right when it is caught? Does it disappear as it is being put on? Does it never disappear and become the exception to the rule? There are a few instances (Lost Boys, for instance) in which a vampire is holding an object and waving it around as a novelty, giving the reflection of the object being held, but not the vampire. Really, what happens in this situation???

You know that scene in Clerks. “Did he just say ‘making fuck?'” That was a big chunk of my day today. I was working while listening to The Red Elvises. “We’ll learn hula dance to metallica song.” “My horse went to heaven/He had too much grass/I ain’t got no pants/To cover my ass.” Cheezy and lame, but all on purpose and actually musically talented.

At bedtime, there is nothing better than a big warm bed–with a king-size fleece blanket on a queen-size bed with an exquisite handmade velvet comforter, and two kitties. Well, maybe there is one thing better, but she is not here tonight. 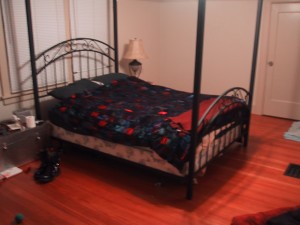 MMmmmm… sleep. That’s where I get to be a viking.

Mental note: take a better picture during the day, with natural light. The combination of overhead light and flash made the picture a bit too blurry.