Please note that all blog posts before 8 April 2007 were automatically imported from LiveJournal.  To see the comments and any LiveJournal-specific extras such as polls and user icons, please find the source posting at http://brianenigma.livejournal.com/2003/08/ 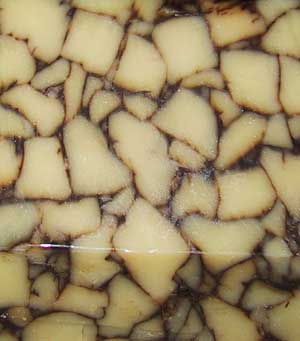 What is it? A tabletop? A bathroom fixture? A chunk of wall? A piece of art? 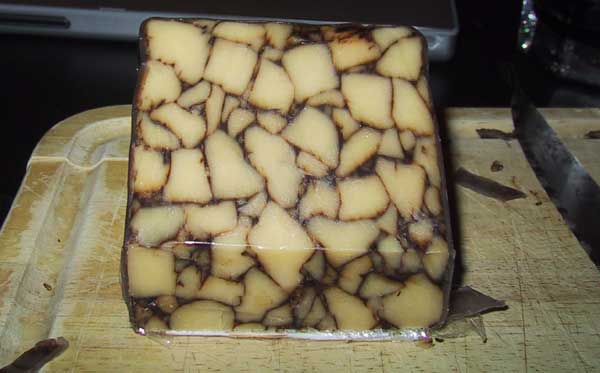 It turns out to be some cheese, Irish Porter, I bought yesterday on an experimental whim–partly because I like most cheeses, but mostly because this one looked so strange. Yes, it looks kind of gross. Yes, it tastes REALLY good. Later research shows that the marbleization is really Guinness Stout infused in cheddar.

This morning, NPR's Weekend Edition was playing an acoustic piano chunk of an Aphex Twin song between segments. It was basically “Film” off of his “Come to Daddy” album, but on a piano. I do not know if it was an alternate version (I am open to the option, but doubt it since there is nothing like that in my 12-album, 95-song collection of everything Aphex) or a cover or what. Maybe my ears were not working that early in the morning, while I was waking up, and it really was the album version.

One hour: This American Life. It is all about people getting all MacGuiver on things.

Today, we go find an Asian market called “Wasabi” that is supposed to be really good. I need to stock up on rice, spices, and sauces. I also want to check out their fresh sashimi. From their ultra-minimalist website, it looks like they have more chunks of raw fish than Mitsua back home. Maybe I will pick up some fresh raw salmon.