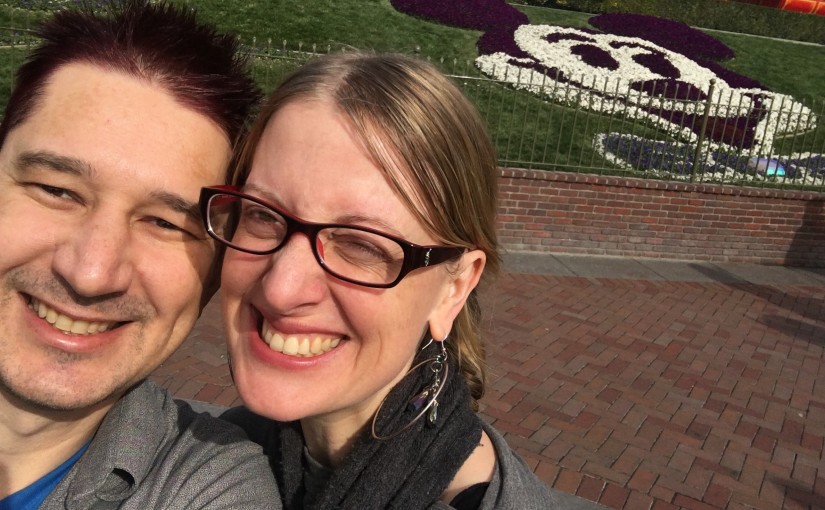 I am over half-way through my two month sabbatical. I am extremely fortunate that I work somewhere that the founders, 10 years ago, first came up with what seemed like a ludicrous sabbatical policy (6 weeks of time off after 5 years of employment), and second, founded a tech company that’s still a great place to work after 6 years. In a world where the average tech job lifespan is 2–3 years (and in some cases, the average tech company’s lifespan), that is something to be thankful for. Also: we’re hiring.

The start of my sabbatical coincided with the holidays. For me, both the holidays themselves as well as recovering from them was a little overwhelming and nonproductive in terms of “side projects I want to work on while on break.” I’ve still only barely scratched the surface of those projects. I blame The Witness (no spoilers!), the new Tomb Raider, and Firewatch. But for two weeks in January I had a proper vacation. A much-needed vacation. I spent just under a week at Disneyland and just over a week in Amsterdam. This particular blog post will be about that first leg.

For me, Disneyland really is a happy place. I grew up about 30 minutes from the park. For as long as I can remember, twice a year — my birthday and my little sister’s — my parents would take the family (and sometimes a childhood friend) to Disneyland. There were three times every year in which I couldn’t sleep due to excitement and butterflies in my stomach: Christmas eve and the night before a Disneyland trip. I got to know that park like the back of my hand. Through a good chunk of my 20s, I had an annual pass. It was a place to hang with friends, a place to take dates, a place to just go alone and find a quiet spot off the beaten path to meditate or people-watch. I’d occasionally meet up with friends after work for dinner, and we’d have a good time without even riding any rides. It holds many good memories.

I try to return every few years, but it’s been about 5 or 6. Because it had been so long, I thought I’d go fancy and stay at a fancy hotel that’s very nearly inside the park. The Grand Californian isn’t technically in the park, but it’s on Disney property, borders the park, and has a private park entrance right off the lobby. It’s expensive, but it’s nice to indulge every so often.

The hotel itself looks like they sent some imagineers to Timberline Lodge, cribbed the aesthetic and designs, and upscaled it. Timberline was built during the Great Depression as a WPA project and it’s big. Its primary materials are boulders and trees honed down to massive square timbers, bigger than a telephone pole. The lobby is an open 3-story hexagon with an imposing stone fireplace (also hexagonal) in the center. The fireplace openings are so large that the metal supports you put logs on (called andirons) are railroad rails. And Disney took this old-school palatial ski lodge style and made it bigger. I’m sure most of it is a fake veneer, as that is the way of Disney, but it certainly invokes the spirit of such a ski lodge — also the way of Disney. And despite the size, it still feels cozy. Outdoors, it’s still California. Kim basically adopted this little group of lemon trees, since we’re unable to grow them in Oregon. We stopped by to say “hi” to them every morning.

This trip focused on hitting the old favorites, revisiting the cheesy things I’ve reflexively ignored for years, and seeing how the park has changed.

For me, the top rides to hit were Star Tours and Space Mountain. In the wake of the new Star Wars movie, I feel that Tomorrowland has become Star Wars Land — not necessarily a bad thing, but a little jarring with the faint smell of a marketing money-grab. When the true Star Wars Land behind Frontierland opens in a few years, I guess we’ll see how Tomorrowland evolves.

As always, Star Tours was amazing. The last time I was at Disneyland was the tail end of the older version of this ride. Rex, voiced by Pee-Wee Herman, took you around on the same adventure every time. Just after that visit they updated it to include variations in the journey and C3PO as the pilot, with Rex demoted to a shipping area, occasionally burbling one of his old signature lines. The queue update was fun. Although they yanked out the part with the Starspeeder spewing smoke when R2D2 overloads it (or maybe they were just out of smoke juice), they added a great TSA-style luggage screening bit with a robot x-raying baggage. It had some great jokes and visual gags — an improvement over the worker robots in the previous version of the ride. The queue also featured the first transparent LCD video screen I’ve encountered. I’ve seen this (via Twitter, not in person) on Coke fridge doors, but never with my own eyes. My one minor gripe — and this is where I push my nerd glasses further up my nose and mutter, “um, actually…” — is with the in-story timeline of when this adventure is supposed to be set. You have Darth Vader antagonizing you (original Star Wars). You have the starfighters seen piloted by baby-Darth-Vader in episodes 1–3. You have Jar-Jar. You have Finn piloting the Millennium falcon. You have the tie fighter style, with small red highlights, from the new movie. It’s just all over the board. And something only a supernerd is likely to notice.

Hypserspace Mountain (née Space Mountain) also got a Star Wars update. The projected visuals are much better than before, but honestly I miss the buildup and raw energy of the space techno surf guitar from an earlier incarnation. I also miss the “space cookie” astroid, which got replaced by an X-Wing or Tie Fighter or something.

The abominable snowman in The Matterhorn is now a lot more visible and in the forefront than when I was last there. In the past, you saw increasingly recognizable views of it, from just glowing eyes at first to a final full-size monster toward the end. The current version puts him front and center. I’m not sure if it’s more or less scary, but it’s more visually impressive due to the detail work on the snowman.

I am sad that I didn’t get a chance to visit the Haunted Mansion this trip. The entire week I was there they were refurbing it from the Nightmare Before Christmas setup used during the holidays back to the regular haunted mansion setup you see the rest of the year. Next time.

A common theme in upgrades from my last visit is projection-mapped video. They’ve had this, in simple form, since the 70s at the Haunted Mansion with the singing busts that consist of a film loop of four dudes singing projected on to four blank busts. I’m sure they’ve since switched it to digital. The Buzz Lightyear ride features a blank-faced Buzz, fully audioanimatronic, with a face animation (including expression and lip sync) projected on his face. This is now used in a lot more places. Off the top of my head, many of the cars in the Cars Land ride use this method. More subtly, there is a part of the Thunder Mountain Railroad where you’re pulled through a cavern of powder kegs with fuses. I think the loose flame and explosion were inferred in the past with lighting and sound. The modern version of the ride has physical ropes (fuses) pinned to the walls that they projection-map sparks and flame onto. Again, it’s subtle, but it’s a powerful effect. There were several other places they used projection mapping, but I didn’t think to jot down notes.

A minor theme of my trip was embracing the cheesy things I’ve always written off as not-worth-it in the past. This includes *gasp* It’s A Small World. I seriously don’t think I’ve been on that ride since my age was in the single digits. It wasn’t as bad as I expected, nor was it great. The building-facade-as-cuckoo-clock was fun. Surprisingly, the musical earworm wore off quickly. But the ride itself was just… lackluster. I’m sure it was amazing at the ’64 World’s Fair and continues to be amazing to small children who are easily amused by boring things that clunkily move around, but as an adult revisiting, it fell short. I got to go on the Roger Rabbit ride for the first time a long, long while. It lives in Mickey’s Toon Town (“a land for BABIES!”) whose entrance is right next to Small World. I’d avoided Toon Town for as long as I could remember and forgot that it contained this one ride. Of course, it’s a fun remix of a “dark ride,” using Haunted Mansion style cars, but which can free-spin like the Teacups.

Another cheesy thing to try out was the Rainforest Cafe. I don’t think I’d been to one of those since my early teens. I remember it being a step up from Chuck E. Cheese in terms of dinner shows, but not outstanding. And no video games. I never had the desire to go back as an adult, and honestly it was the butt of a few jokes here and there. Returning as an adult, I find the front side to be annoyingly marketing-heavy. You get to wait for your table in the gift shop, which is full of junk both with and without their frog-dude logo. The dinner itself was much better than expected, a good value, and the “forest” you get to dine in with its periodic audioanimatronic shows wasn’t at all annoying. I got to see monkeys swinging from the ceiling every fifteen minutes!

Outside the park, I got to check out Trader Sam’s, a Tiki bar that I’ve heard much about. I’m not typically a Tiki bar person — I tend to like savory, sour, and medicinal-tasting drinks over sweet ones — but had fun and came home with a zombie Tiki mug. I also might have been a little naughty in their bathroom with stickers. I finally got to taste beignets for breakfast, albeit I assume a watered-down Disney approximation. I got to visit the Lego Store (which I know we have in Portland, but haven’t been since before my last Disney trip). Kim found one of the infamous Disney feral cats, but it ran off before we could get a picture.

When departing, we had to move our pickup location from our hotel, The Grand Californian, to the far side of the Disney Hotel. The main street, which sits between the two hotels, was totally closed off because of a Star Wars themed marathon. Part of the walk to the new pickup point was along the marathon path. By that hour (which was still quite early in the morning, about 6am) the hardcore marathoners had blown past and everyone was walking and having fun. I hadn’t realized that the cross-section between marathon runners and Star Wars fans who are fanatical enough to dress up was so large.

Overall, it was a fun time and it was great to see all the small improvements to a park I basically grew up in. But it was time to travel for 16 hours to a new destination.

One thought on “A Disney sabbatical”