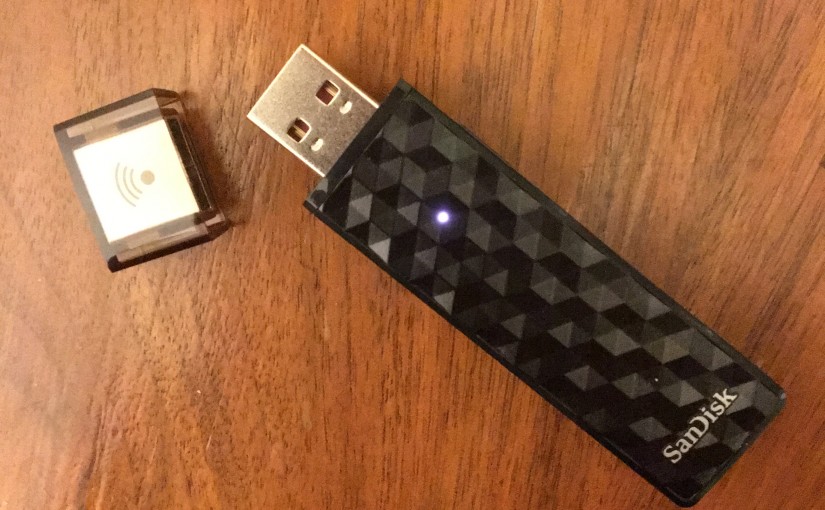 In less than a week, I’ll be traveling the world, living out of a backpack. I’m going light on the tech this trip. My “laptop” will be the iPad, probably living in the location’s base of operations (hotel or hostel), with the phone as my everyday-carry communicator. Although I have both iPad and iPhone with large capacity, I don’t want to needlessly fill them to the max with a ton of media. I like having breathing room for things like photos and other day-to-day stuff.

I like to wind down at the end of the day with a TV show or movie. After a stressful day, there are some “comfort food” shows I enjoy retiring to — shows I’ve seen again and again and will rarely tire of. After a less stressful day, I’m open to fun new adventurous shows. These unwatched shows may suck, but I’ll give them a chance. Either way, it’s not easy to know ahead of time what style of show, nor what specific show, I’d be into on a given night. Not knowing what show I’ll be craving requires me to carry around the first season or two of a half-dozen different shows, or perhaps more if I can get away with it, just in case.

With a normal laptop, I’d just throw those media files on the generous space offered by the internal hard drive. Or perhaps I’d throw them on a thumb drive if space felt a little tight. Neither of those options work well (or at all) with the iPad. There’s plenty of free space on internal storage, if you want one or two seasons of a TV Show, but not much more than that. There’s no way to plug in a USB thumb drive. Or to manage storage even if you could plug one in (like hacking the camera connect kit).

That’s where the SanDisk Connect Wireless Stick comes in. 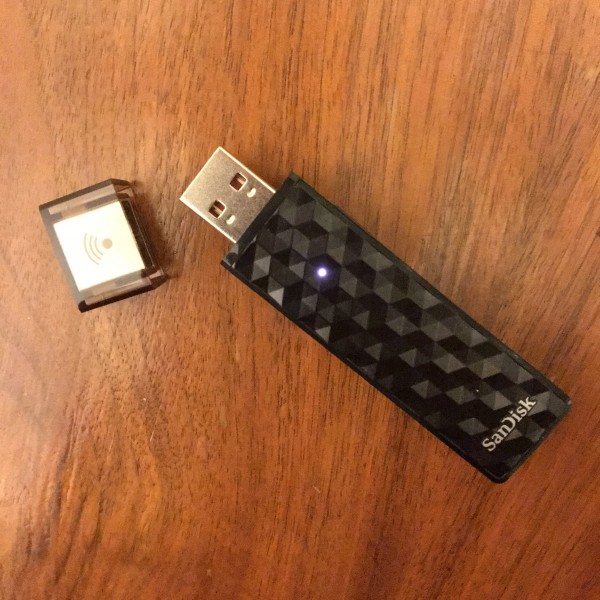 On the surface, the SanDisk Connect Wireless looks like a stylized thumb drive with a mysterious low-profile button on the side. In size, it’s pretty chunky by my standards, but then I’m used to the LaCie PetiteKey, which uses some USB connector trickery to build a thumb drive not much thicker than a regular house key. The reason the SanDisk thumb drive is so thick is because it’s not just passive memory chips that pull power from the USB when plugged in. It contains a battery, a microprocessor, a full network stack, a WiFi access point, and a small antenna. All of that is crammed into the “chunky flash drive” shell.

You see, this SanDisk thumb drive is really a Network Attached Storage (NAS) device that masquerades as a thumb drive when necessary. My process looks a little something like this:

First, plug the thumb drive into a desktop PC. This charges the battery as well as gives you direct access to the filesystem. Copy over your files and folders. In my case, it was strictly video files, but you can do audio, or any other format that your iOS device knows how to read.

When you’re on the road, push the side-button. This wakes up the thumb drive’s WiFi, which you can verify with the blinking light on the side. Connect to its WiFi access point. (You can leave it open, change its name, or add a password.) Open the SanDisk Connect Drive app on your iDevice. Locate the file(s) you’re interested in. You can then play the video direct from the SanDisk Connect app if you’d like. In my case, to preserve battery power, I manually copy a few episodes to the phone, managing storage space by hand. I do this by saying “Open In…” and selecting GoodReader, the sandboxed filesystem Swiss Army knife. GoodReader gives you a little filesystem and filesystem manager, connects to dozens of different protocols and services (ssh/scp, FTP, HTTP/WebDAV, Dropbox, and so on). It also lets you view all common file formats including text, PDF, images, and video. It also lets you hand off files to another app, for instance an eBook reader. When you’re finished with the thumb drive, long-press on the button to turn it off.

And now I have DVD rips of a dozen different shows (thanks, Handbrake!) in my pocket, ready to be swapped into an iPhone or iPad depending on my mood.