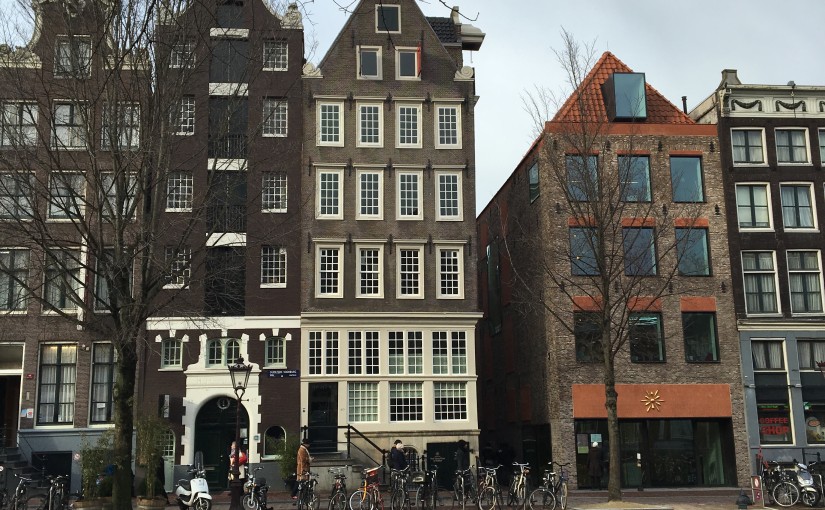 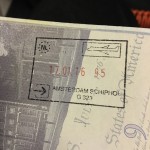 As you might have seen in a previous blog post, the first leg of my sabbatical vacation was to Disneyland. The second leg was Amsterdam. I had just over a week there, and it wasn’t nearly enough. Between jetlag, a headcold, and the sheer amount of stuff to do, I didn’t have nearly enough time.

I’m not sure that I can proclaim the flight to Amsterdam was the recipe for “worst flight ever,” but it certainly had its share of bad ingredients. I was lucky in that every flight so far had a lack of screaming kids. No such luck on this flight. The guy across the aisle was an older hippie type, who probably lived a shoes-optional lifestyle. Once the flight was underway, he removed his shoes, pulling his knees to his chest with the bare feet resting on the edge of the seat. I don’t know when he last washed his feet, but it wasn’t recently enough. The stinky foot-cheese odor was literally vomit-inducing. I had to crank up the personal A/C nozzle and nonchalantly put my hand on my face to avoid the smell. Mix well, and fold in short bouts of bad turbulence to complete the recipe. Serve with a slight tickle in your throat at the start of the trip, turning into full-fledged nasal drop and coughing by the end of the flight, 15 hours later. Yes, I think Kim and I picked up a bug at Disneyland that germinated on the flight. She was down for the count for about two days, I was offline for about three.

Amsterdam is a short train ride from Schiphol airport, and the place we stayed is a short tram ride from the train station. (Trams are the Dutch equivalent of streetcars.) We stayed at an upscale hostel called Hotel Not Hotel, which is situated behind a mosque, and has an attached bar/restaurant called, unusually, Kevin Bacon.

This isn’t the style of hostel where you’re sharing a room with several bunkbeds and have to keep your belongings padlocked in a footlocker. It is very swank inside. The communal lobby, a two-story open affair, feels like an upscale hotel. Off of the communal area (and in one case, directly in the space) are small dual-occupancy rooms. I use the term “room” liberally here, as they are a wide as a bed and as deep as a bed plus clearance for the door to swing inward. Most of the rooms have no private bathroom, but we sprung for one that does. The bathroom was an offshoot just barely large enough for a toilet, a minuscule sink, and a surprisingly large (by comparison) shower. The upstairs rooms were all hidden behind bookshelves. One room downstairs was literally an old tram, sitting out in the open, converted into living quarters.

The view from bed and a sweep of the bathroom:

Our stay included a simple but large breakfast every morning at the Kevin Bacon. Ham, cheese, hardboiled egg, roll, croissant, mason jar of yogurt, and coffee or tea. It was always fresh and delicious. The tea wasn’t always mint, but most places that served mint did so with whole branches instead of bags or loose-leaf. I’d never seen that before — it’s clever!

Although we were both sick on the first day, I felt a little better than Kim and set out to accumulate supplies. Cough drops were easy to find, as were pocket packs of tissue. It turns out that Nyquil requires a prescription there. Not far from the hostel was a street market. With no refrigerator and no table to prep or serve food, we had to go simple and light. I found a vendor with a fresh orange juice bottling machine, and on a later day Kim brought back some tangerines. The veggies, fish, and meats available from this market and all around town looked amazing, but we couldn’t do anything with them, given our living situation.

(Incidentally, the DNA Spray is an anti-theft system that the retail shops there use. It’s more fancy than the explosive dye packs attached to clothing tags or bank money bags, using short DNA sequences as a unique serial number. I thought the stick figure artwork was cool enough to capture, reminding me of some horrible fate to expect in Portal.)

I though Automats had gone the way of the dodo bird, but apparently that was just my US-centric view. They’re alive and well in Amsterdam. I ran across several locations of FEBO, an automat chain which seems to be doing well. I never got the chance to try it but will have to have a go if and when I return. 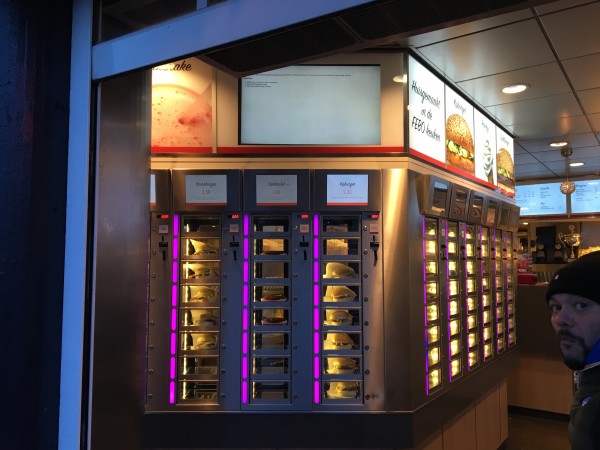 And before I close this blog post and move on to ones about specific locations I visited, I’d like to call out the transit infrastructure. In a word, it’s amazing. It felt like everyone was on a bike or vespa scooter. Many of the scooters had an apron you’d strap around yourself and mittens built around the handlebars — to keep you dry and warm. Bikes were everywhere, and all of the major streets had a separate bike lane, split from car traffic by a parking lane or curb. The train station had this triple-level bike parking structure, which also overflowed to a space across the road. 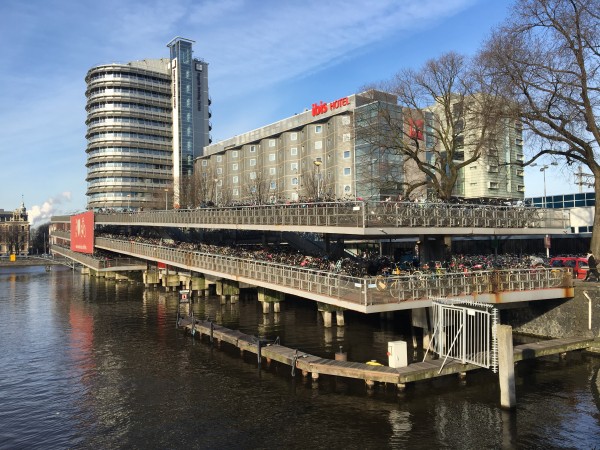 There were a few cute tiny cars parked up on the sidewalks. I don’t know whether it was legal, or if it was just something the police didn’t feel the need to bother over. At any rate, they looked like fun little cozy cars. 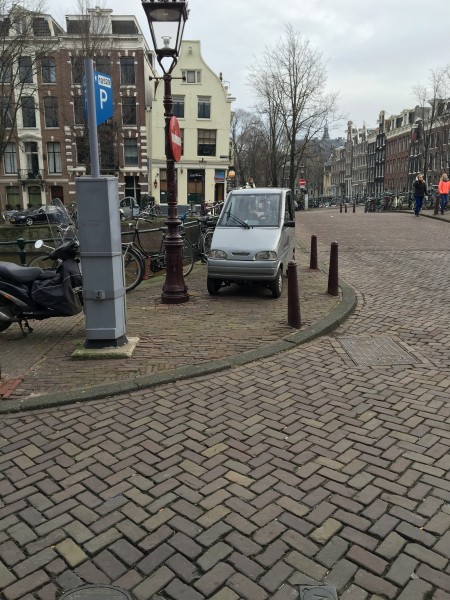 The trams were frequent, plentiful, and well-designed. Each had a driver in the front and a conductor, at a service counter, in the back. These were the two entry points. The rest of the doors were exit-only. You’d swipe your RFID card to get on and off. If you had no card and needed to purchase a day pass, or had questions, you’d use the conductor entrance and go to his service counter. This left the distraction to a minimum for the driver. The conductor could handle your needs even after the driver pulled away from the stop. The trams all had computer screens or LED panels that not only told you your next stop, but the upcoming few stops. As a foreigner in a strange country, this excess of information was comforting. 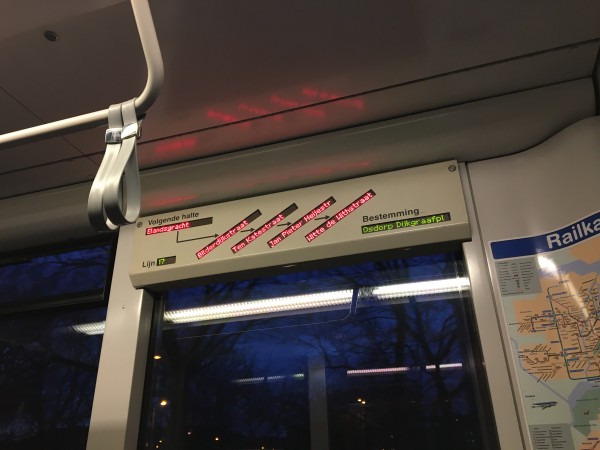 In upcoming blog posts, I’ll talk about a few of the places I visited while there.