I hit the App Store “release” button for ARG Tools v2.1, which means it should be showing up in your iTunes and on your devices shortly. This version adds a couple of new features as well as a few reference sheets, but the important news is that this may be the final version of ARG Tools as you know it.

Don’t worry — the project isn’t going away. It will be going through some re-branding that I wanted to do a while ago. The upcoming iOS7 makes it convenient for me to do that now. The next major version will be an entirely new app, tentatively named Puzzle Sidekick. It will be for iOS 7 only, and I would like to use the UI revamp to also add iPad support.  Instead of flat-out replacing ARG Tools with an iOS-7-only app, I thought I would keep it around for those that are not ready or able to upgrade.  In theory, I could write an app that looks and works well across the complete matrix of iPhones, iPads, iOS 5/6, and iOS 7, but that is a lot of work, testing, and support.  ARG Tools is a labor of love and I’d rather be bringing you new features than playing tech support.

There is a new section in ARG Tools for news. When the switch does occur, you will see it in the ARG Tools news as well as on this website.  Again, ARG Tools itself isn’t going away.  It will just be minimally updated, in favor of the new Puzzle Sidekick.

The two new features are the news section and bracket-notation in the word pattern matching (i.e. crossword search).

The news section is fairly straightforward. When an internet connection is available, and if it hasn’t grabbed news in a while, it will attempt to grab and cache the latest ARG Tools news. Brackets in the word patterns is a little more complex to explain. Folks that know Regular Expressions already know and understand. For everyone else, think of the brackets (and the letters between) as something similar to the question mark. The difference is that the question mark is unbounded: it can match any letter. The brackets can only match the letters contained within. For example, in the screenshot you see “NI??[AEIOU]“. This matches all 5 letter words that start with “NI” and end in a vowel. (Of course, this includes NINJA.) In the next day or two, I should have a blog post that gets in to a bit more detail.

In the reference section, we’ve added billiards, darts, and planets. And yes, I’m sticking with Pluto still being a planet, dammit. 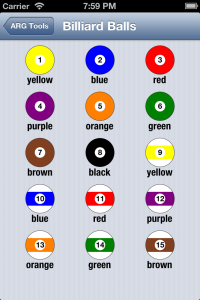 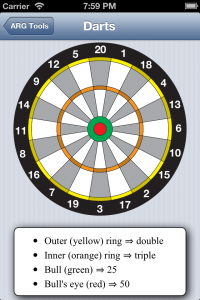 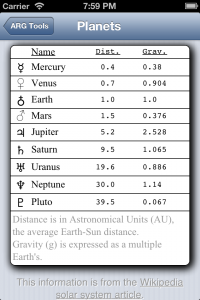 And finally, if you find that you do not have enough puzzle events in your life, we now have a link to Puzzle Hunt Calendar. 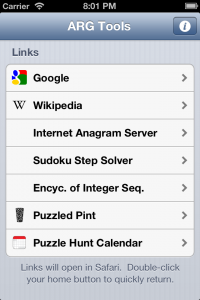