Please note that all blog posts before 8 April 2007 were automatically imported from LiveJournal.  To see the comments and any LiveJournal-specific extras such as polls and user icons, please find the source posting at http://brianenigma.livejournal.com/2005/03/

On the way to work this morning, on the freeway, a spider descended from the ceiling on a thread of silk directly into my eyesight. I grabbed the thread and moved it to the floor in front of the passenger seat.

It is 3pm. I have not done any work yet today.

There was an inchworm climbing up my shirt all during a meeting. After the meeting, I went outside and helped it to a low-hanging leaf in some ivy under a tree.

I finally got an email back from the distributor of The Upsidedown. After hitting up a bunch of other record stores, it turned out that I could just go a few blocks up the street to Everyday Music–a place I never think about because I rarely go that direction up 20th–where they had several copies. I still have not had the time to listen to it. Everyday Music is a great place: supermarket-HUGE with a very nice selection of used DVDs. While all the DVDs are used, the CDs are like Powell’s with the new and used copies shelved alongside one another.

P.S. I did not realize this statue was within walking distance of work: 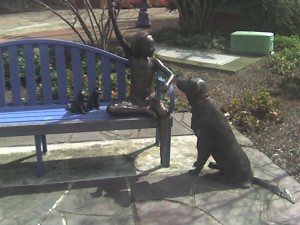 If you cannot quite make out what the subject is from the crappy cameraphone quality, it is a statue of a little girl holding an ice cream cone away from a dog, with two kittens on the bench next to her.