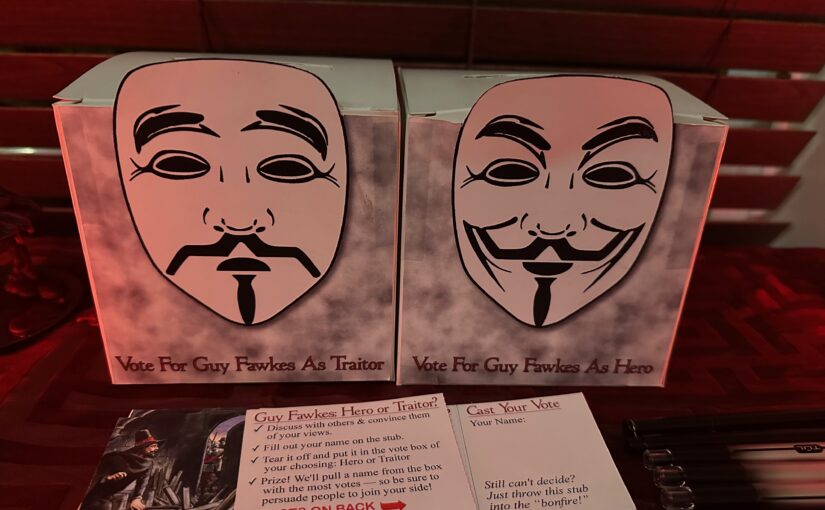 Before the pandemic, Christine and I would regularly host a Potions Party around Halloween. This was always an extravagant affair and took a lot of work. With people feeling more comfortable with the pandemic situation, we thought we’d host a “lite” version of an Octoberween party — not as excessive as the Potions Party, but themed and decorated, with special drinks and special activities. Because Bonfire Night fell on the Saturday after Halloween, we thought we’d put together a Guy-Fawkes-themed party.

Christine had recently been to an interactive Guy Fawkes exhibit in London, The Gunpowder Plot. It tried to paint a fair and impartial picture of Guy Fawkes, his life, and the world he lived in. Personally, I have to admit that most of what I know of him comes from V for Vendetta (both the comic and the film) plus the “fireworks and effigy” celebration that makes him out to be an extreme Catholic terrorist. But was this the real story, or propaganda handed down over the generations? Christine definitely had some intense, almost Anne-Frank-like, experiences at the interactive experience that suggested he wasn’t necessarily the villain that history paints him to be, but also not exactly the sort of anti-establishment hero that is implied from more modern pop culture.

We thought we’d take it to a vote. Of course, we live in progressive Portland, have progressive friends, so this isn’t an unbiased sample. But still — we wanted to take a vote as one aspect of the party.

But also: you’ll remember that we are in Portland. In the US. Where people have largely never heard of Bonfire Night and might have only the slightest inkling who Guy Fawks is (outside of “Anonymous” masks). I thought I’d start with some research, to present a set of facts to folks, to better understand the situation. And, boy! Did I do my research! I felt like I’d written a high school history paper! Three printed pages, a little bit of fun and snark, printed and posted to our pinboard as well as a QR code to get to an online version. I’m actually quite proud of the result. “Guy Fawkes: Hero or Villain?”

I distilled some of the highlights down to bullet points printed on “tickets.” The tickets also had that QR code, pointing to the more detailed summary. The idea here was that we’d hand out the tickets as people arrived to the party, they’d tear off the stub, and place it in the appropriate box to vote: hero or villain. To (literally) sweeten the deal, we turned it into a game with chocolates as the prize. Whichever box got the most votes, we’d pick a stub at random as the winner. This allowed for people to argue and convince others of their point of view, in an effort to get more votes on their side, to qualify for the prize.

With a little photoshoppery, I crafted a “sad Guy Fawkes” graphic and affixed signs to the voting boxes. A friend pointed out a mistake on the box text: instead of “villain” I’d typed in “traitor.” Whether or not he’s a hero or villain, he’s technically always a traitor to the crown.

Given Portland had a strong Black Lives Matter movement (and several party attendees regularly went to the protests), our overbearing cops have the highest brutality stats in the nation, but also Portland is, when not agitated, generally peaceful and welcoming, I wasn’t sure which direction the vote would go. I didn’t vote because I didn’t think it would be fair, as host. I probably would have went with Villain, given the collateral damage of bystanders and architecture (not just parliament but also Westminster Abbey) — but I was on the fence and could have easily been swayed the other direction. We counted up the votes and it was a landslide for Hero, with only two votes for Villain. I’d expected maybe a little more of an even spread, honestly. The partygoers had spoken and, at least that night, with that mix of people, a Guy Fawkes was a hero.

Overall, it was a fun exercise, and I’d learned a lot during my research that I’d previously not known at all. It was also fun crafting up the voting boxes, tickets, and a chance to wield the rarely used tear-off-ticket-stub dashed line blade on my paper cutter.