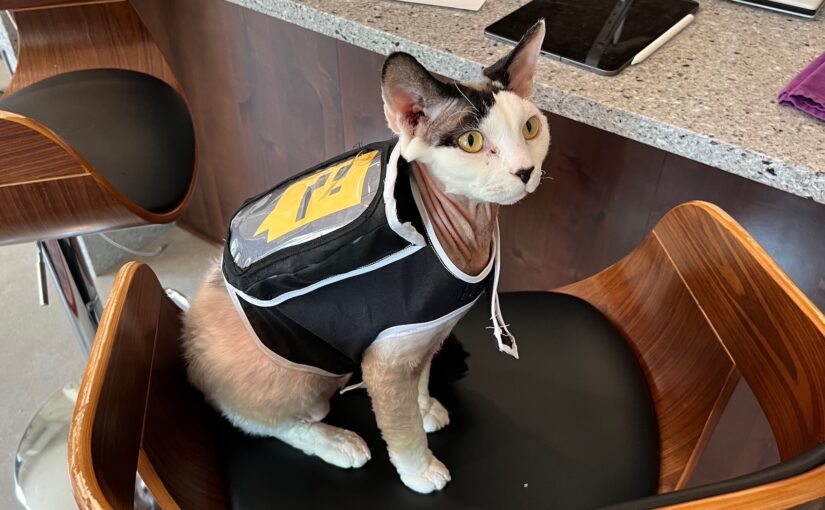 Stray was recently released and it is a beautiful game with all the feels. I’m not going to talk too much about it here, but I am going to talk about our little furry protagonist and the cute little cat backpack. Sure, it’s a plot device that houses your little AI drone buddy who can open doors for you. Sure, it’s a game device that lights up in different ways to indicate available actions. And sure, just like a real cat and real backpack, when first put on it makes your little fuzzy dude entirely uncomfortable. It’s an iconic piece of the video game.

Most of my cats are bald or nearly-so. They aren’t strangers to wearing sweaters and other clothing. Iconic piece to the video game…? Hmmm… I’ve purchased premade cosplay items for myself in the past, but my sewing game is weak. I can put together two fabric rectangles, sew them together on three sides, add a pair of grommets, and end up with a drawstring bag. That’s my skill-level. I thought making a cat backpack would be a healthy way to push my sewing boundaries. So — let’s design a Stray backpack!

I had a rough idea in my head of how I wanted to design it based on screenshots I took throughout the game. It’s two pieces: a harness and a box. I have various sweaters, capes, and costumes for the cats. One, a bunny, has a shape similar to the harness in the game. I cheated and traced it, making the lower straps a little more wide.

I traced it onto a paper bag, making that tweak to the straps. To better get symmetry, I folded it in half and cut both left/right edges at once.

From there, it was a matter of tracing with chalk pencil, cutting, and edging it with bias tape to get the right look. Don’t look too closely — this was my first ever time at using bias tape, and it shows. Those curves and elbows really aren’t friendly to affixing it. I also added some velcro to secure it around the torso.

After few test fittings, found I had to add extra velcro, and started prototyping the box part of the backpack. The one you see in these photos is actually a little larger. The bottom end of the box is 1 inch (like the final version) but the depth at the opening here is 3 inches. I trimmed that down to 2 inches in the final design.

After playing around with the design, I made myself a pattern and put together the box. The neat thing about the box is the vinyl window pocket. Yes, the fabric store has sewable clear vinyl. You can print out a “screen,” slide it in the pocket, and that’s what is “displayed” on the backpack through the vinyl.

(Not pictured above: a muslin backing behind the vinyl window, forming a pocket.)

The final step was to sew the backpack onto the harness. I just sort of eyeballed it.

I don’t have a digital file for the harness part, but you might be able to make something on your own based on tracing the following image to scale.

The box part of the backpack is four sides, but the main face has three layers: the black fabric with opening, the vinyl window, and the muslin pocket backing.

Finally, I have a couple of “screens.” They are (intentionally) a little oversized, but you can trim them down to fit your window.

Were I to do this again:

I think what I have is pretty good so far. I’m skilled at 3D work and would like to design and 3D print at least the face-part of the little B12 robot drone, which I can pin (or otherwise affix) inside so it’s looking out.

I’d also like to see if I can come up something that allows me to simultaneously use a chest harness that attaches to a leash. That’s something I use to safely take the cats outside. (Yes, I’m the weirdo that occasionally walks his cats.)

I’m also open to any feedback, and I’d LOVE to hear if anyone else decides to make a little cat backpack!