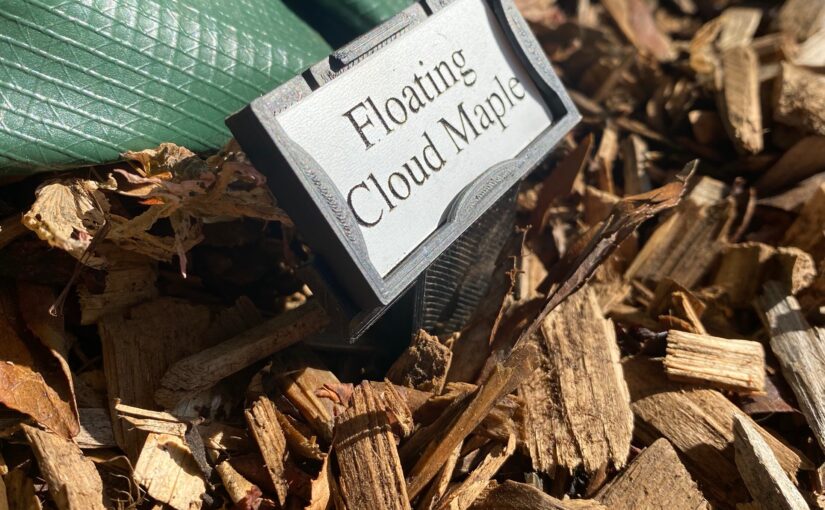 I have a bunch of cool-looking and weird trees at the house. In a notebook somewhere, and elsewhere in a text file, I have a list of their names. And if I’m honest, that’s fine for the one time every couple of years where I want to look up what’s what. If you’ve been to the Rose Test Garden here in Portland, or really, any other botanical garden, you’ve seen that almost everything has a little plaque on a stake that helps identify the plant or tree that you’re looking at. I thought to myself, “those look cool and professional.” I also thought to myself, “hey, self, you have a professional 3D printer and laser cutter in the basement.” I figured I would attempt to design and manufacture some custom plant plaques for myself. This is what I did for the “mark 1” (or “version 1,” for software people) of those botanical plaques.

First, I needed some actual plaques that I could design holders around. My friends at Inventables have a two-layer white-on-black acrylic sheet that’s very similar to what you’d see as a name plaque on an office door, if you were fancy enough to have an office with a door. The vector file itself was trivial to create. Tuning the laser settings just right, so that cut-lines cut all the way through and the etched words only etched down to the black layer took a little while to get just right.

Once I had those, I had to design a stake with integrated plaque holder that fit the plaques. This proved to be the difficult part. (Spoiler alert: it’s difficult enough that now, a year later, I need to make some revisions — the “Mark 2” version will be coming soon to a blog near you.)

The thing about 3D printers that take filament — as opposed to ones that use power or resin and use epoxy or lasers to build up layers — is that physics puts certain restrictions on designs you can easily make. It builds objects by putting down layers one tenth of a millimeter at a time. You start with the layer that’s sitting on the glass plate, then lay down the layer above it, then lay down the next layer, and so on. If your design has too many overhangs or sharp angles, then the plastic is going to drool and drip all over the place. The layer under a given layer needs to support what’s directly above it. This means that nice circular arches and spheres are fine, but anything with an unsupported flat spot or shaper angle is going to get pretty ugly. Basically, anything at an angle sharper than 45 degrees. (And yes, I have a two-headed printer and can eat up a ton of water-soluble to build supports for those difficult places.) But I thought falling back to the water-soluble plastic was going to be inelegant and expensive.

I kicked around a few ideas to work around the physics of drool during 3D printing and came up with a 2-parter solution. I’d print the plaque-holder and the stake separately. They’d each print flat, designed to work within the constraints of 3D printing with droop. And they’d assemble together: interlocking and could better weld together with a bit of A/B epoxy. For maximum durability, I’d make them out of ABS plastic — the same stuff used to make LEGO pieces.

I was a little unsure of the retaining clips in the main holder, but everything mated just great!

The two pieces assembled great! And I had botanical plaques! And they survived quite a lot of weathering!

…that is, for about a year. The two piece design had a flaw, and that is the joint between the pieces weakening over time. Hot, cold, water, ice. Eventually the epoxy seam split and the plaque holder broke off from the stake.

Right now, I’m playing with a “Mark 2” design that unifies both pieces into one solid unit and also plays within the bounds of what the 3D printer can do without support (or, at least, with minimal support). Keep an eye open for a future blog post where I’ve (hopefully) solved this problem.

One thought on “Botanical Plaques, Mark 1”