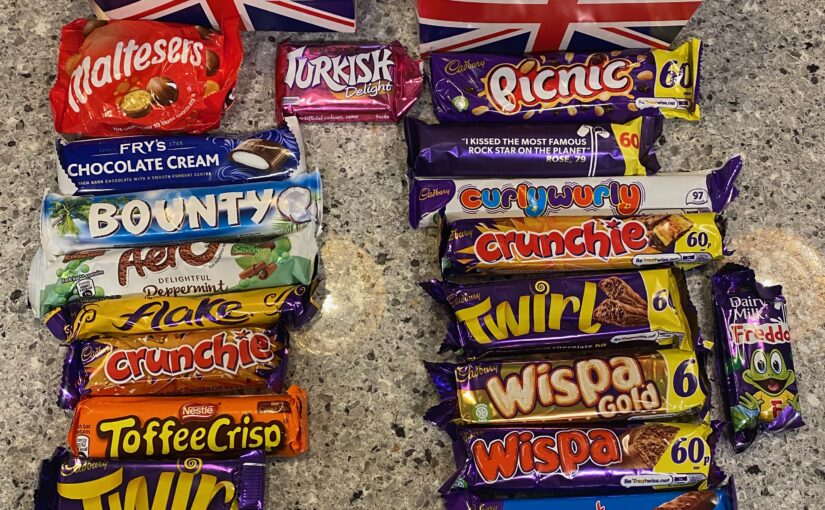 One month ago — on July 4th — it was Independence Day in the US. I don’t think I did anything special for it last year because of the pandemic, but the year before I joined some friends for High Tea at my favorite local tea restaurant. I thought that was a fun subversive way to celebrate. The tea shop wasn’t taking reservations this year, so I thought I’d try a different twist on the theme. I decided to order sample packs of weird British chocolate from Amazon Marketplace resellers, shipped via Royal Mail to my house.

There were definitely possibilities for weirdness and minor problems with this plan. The two resellers were randos, sending chocolate labeled as “multipak bar — not for resale.” Shipping was a combination of Royal Mail and the US Postal Service. It wasn’t overnight, nor was it insulated, iced, or otherwise protected from heat. I live in the Pacific Northwest, which had a record-breaking heatwave the week just before they arrived. So some of the chocolate has whitened with bloom and at least one has melted into an indistinguishable mess (sorry, Freddo).

I should also mention that I’m not a connoisseur of candy and chocolate, so calibrate my ratings to yours with this information. I tend to lean toward sour things — SweetTarts, Sour Patch Kids, Starburst. I prefer dark chocolate over milk. I’m not generally a fan of Hersey’s — it’s a little too waxy and processed. I tend to like chocolate balanced with some other flavor or texture — dark chocolate with pieces of fruit (raspberry, cherry), Nestle Crunch, Butterfinger, Kit-Kat. I don’t typically seek out caramel, it’s a bit too sweet, but I also don’t dislike it in the right context. I don’t like coconut, which disqualifies the Bounty bar.

Ultimately, I ended up with 22 bars, 18 of which I planned on sampling. 3 were duplicates and 1 has coconut. (Spoiler: I got through nine before feeling a bit sick and postponed the rest. They continue to be postponed.)

Basically, malted milk balls, but a little smaller. I have some dark chocolate ones I love. These are alright.

It’s sort of chocolate-covered chocolate? The inside is maybe more flaky or airy. The outside is a chocolate dip or pour. “Yo, dawg, I heard you like chocolate, etc.” A bit too strong for me.

Crunchie maybe has a different connection to Friday than I do: Ice Cube, in the hood, getting fired on his day off, with his stoner buddy.

This candy bar is sort of like a Butterfinger, with the same inside texture, only it’s honey instead of peanut. This makes it quite sweet, but the flakiness is really nice.

I’m giving this 4 stars. The honey+chocolate combo is a little too sweet for me, otherwise it would get 5.

This is a super-cute little frog. The packaging reveals virtually nothing about the content, other than possible nuts and wheat, with nutrition information referred to the outer packaging (which I don’t have). It tastes like chocolate. Wikipedia informs me that it’s just a milk chocolate frog. I like the simplicity, and I like that it’s not a huge chocolate bar or bunny. I would have liked it better had it survived the trip through the mail.

4 stars for being genuine and lacking pretentiousness. For being a simple, modest chocolate snack.

This one had some minor quality issues during shipping, but seemed to hold up well. If I’m not mistaken, this is the same as the Twirl bar — aerated chocolate-covered in chocolate — but with a middle layer. That middle layer makes all the difference. The inner chocolate is coated in caramel, and then the outer chocolate is poured. It adds some more interesting flavor notes to the experience, not just chocolate-on-chocolate.

It’s still quite a lot of chocolate. 3 stars.

Normally, “flake” is a name you’re trying to avoid. The texture’s visibly weird, and despite a little whiteness (likely from hot conditions during shipping), still looks much like image searches for the Flake bar. This one definitely lives up to its name. Each bite, pieces everywhere. It’s a big chocolatey mess of flakes. An Instagram friend mentioned, as a kid, ice cream trucks would stick a Flake bar into soft-serve, then chocolate dip the cone. That sounds like a delicious use of this.

4 stars (the average of: 5 stars for texture, 3 stars for flavor — for just being chocolate)

I love the name. I love the dimensions — it’s incredibly long and incredibly thin. This is probably the thinnest candy bar I’ve seen. Thinner than a Heath bar. It’s described as milk chocolate with a caramel center. I opened the package and, SURPRISE! It sort of has this tessellated triangle structure that I find fun and interesting. I have no way to gauge how much candy this is, given the length, width, breadth, and triangular holes, but you know what? I kind of don’t care. It’s a solid choice for a candy bar.

It’s like a Rollo crossed with an Erector Set, only the caramel/chocolate ratio is a little more balanced. (The Rollo is pretty heavy on the caramel.)

This is one single big-ass Kit-Kat bar. You don’t have the fun interactivity (and easy share-ability) of individual bars you can break off. You don’t have the same opportunity of trolling the OCD by taking huge bites of the Kit-Kat without breaking off the individual bars. But that’s fine. This is a good candy, and so far the only one I’ve eaten all the way through. Everything to this point was just a bite or two.

Without the “Gold” (caramel), to me this is just a Twirl, but larger. Chocolate-covered chocolate, if you want that sort of thing.

I’ve sampled 9. 9 remain to be sampled. 4 others are disqualified because they are duplicates (3) or contain coconut (1).