A couple of weeks ago, I attended the XOXO festival here in Portland. Lots of people have summarized it well, with The Verge’s recap being one of the most widely circulated. Nominally, you can describe XOXO as a conference for people making things on the internet — their successes and, most importantly, their failures. The program notes that it is “a festival of introverts, socializing making new friends. A group of people struggling with imposter syndrome, getting together to share their exceptional and endlessly interesting work.” There were many speakers and attendees. Some of the ones you might have heard of include The Queen of Shitty Robots, The Brothers Chaps of Homestar Runner fame, Anita Sarkeesian of Feminist Frequency, Sarah Jeong, author of The Internet of Garbage, and John Roderick of The Long Winters and Roderick on the Line.

I’m not going to attempt a full summary here, and will instead focus mainly on a few personal moments. The conference started on Thursday, with badge pick-up and a few interest-group-based meetups. Previously, I’d picked up a couple of buttons to put on my lanyard — to help convey that I’m both shy and introverted, with the hope of it being conversation starter and an easy exit were I to get socially overwhelmed. “Social Anxiety.” “Have you hugged your introvert today?” I also brought a sheet of puffy cat stickers that I impulse-bought a few months back at Powell’s. The Write the Docs conference had a little station to personalize your badge with stickers — something I’d never seen before but greatly enjoyed. So armed with cat stickers to share, some buttons to display, and some pins that were gifted to me during the meetups, I had a good set of tools ready to start up conversations and share experiences.

I admit — I was overwhelmed. I perhaps overcompensated by having a bit too much too drink (and later vowed to enjoy sobriety until the closing party). I pushed my comfort boundaries pretty hard, but had a good time and met some wonderful people.

The next morning before heading out to the conference, I was nervous. Like… really nervous. I have a blog that nobody’s heard of, where I post projects that are not at all mainstream-interesting, some even a little hard to describe. I help run the Puzzled Pint headquarters in Portland, but I’m not one of the founders, and constantly feel like I’m not doing enough work to say I’m part of it. I’m just some dude, not a fancy “internet maker.” So I snapped a quick photo and threw it in a tweet to help ease the mind, by both putting my feelings out there and making a little but of fun about the situation. I was happy to see one of the conference founders liked it, and it got a few retweets. 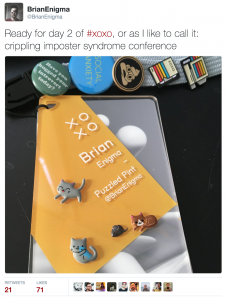 Fast-forward a few hours to the conference opening talk. The two Andys talked about the standard conference-opening stuff. They go over logistics, code of conduct, and… anxiety? 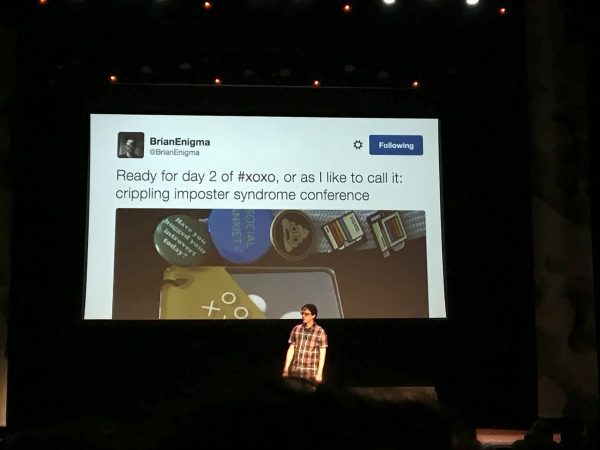 Three seconds of heart attack as I see my tweet on the big screen, in front of all the conferencegoers. But Andy Baio masterfully turned it into a discussion on imposter syndrome, anxiety, and outlets for those at the conference (namely, quiet spaces and a Slack channel).

XOXO turned out to be a conference of feels, for both me and the folks around me. I learned of the Slack #anxiety channel for the first time during that opening talk, and definitely took advantage of it, as well as helped signal to others when and where there were quiet spaces. Socially, I pushed myself harder than I have before, and although it was rough, I’m glad I did. I came away from XOXO having learned a lot about myself, about others, with some new internet friends, and with ideas. Ideas for projects — big and small, silly and useful.

Two ideas that worked out exceptionally well were the stickers and the buttons. Everyone loved the stickers and many people wanted to know where they could get similar buttons. With permission, I garnered a few awkward, but needed hugs. Since I will be at GaymerX next weekend, I thought I would carry across some of my XOXO learnings. I restocked my cat stickers and will have those to share. 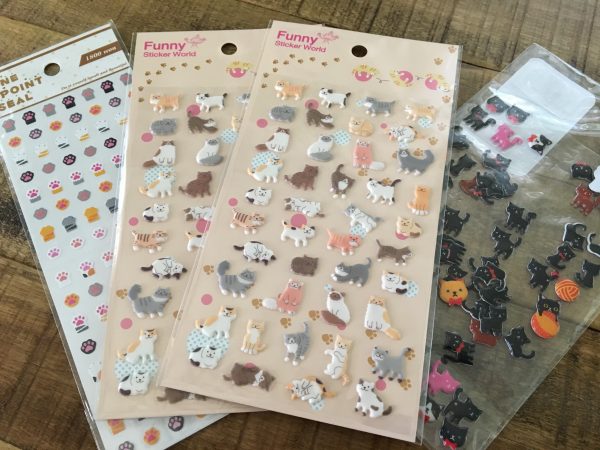 I also used Sticker Mule to order a small bag of buttons. Instead of answering “where did you get that button?” with a shrug and a “…uh, the internet…?” I will be able to help the socially awkward and anxious folks by giving (or trading) a button.

So if you’re at GaymerX, or if you’re a Portland local, ping me (@BrianEnigma) and I’ll make sure you get a button and/or some cat stickers — as a gift from me to you. And if you’d like to use it as a crutch to help prop up a conversation with someone new, all the better.