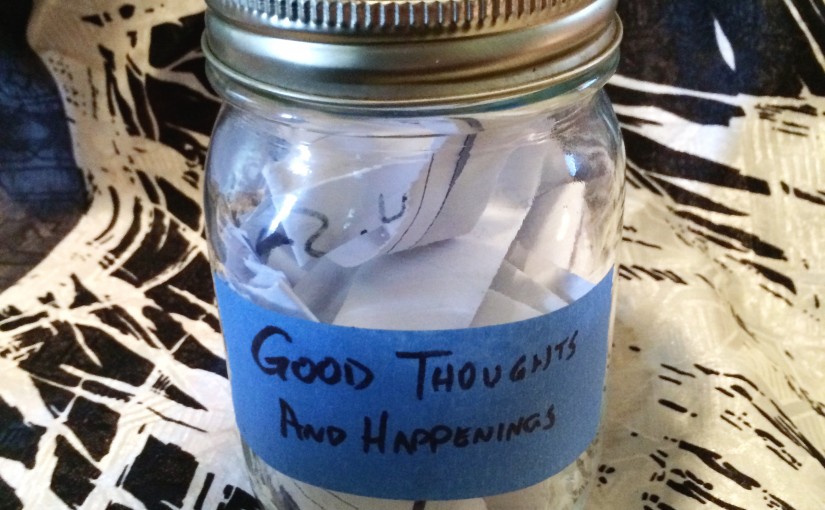 Last December or January, I saw (probably on Twitter) someone who was either starting or finishing a year of a “jar of happiness.” I’m not sure exactly what it was called and I could only guess at the details of how he or she implemented it, but I decided to adopt it for 2014. Because the details were fuzzy, I just went ahead and made up my own rules.

My jar is a mason jar, without lid, that I keep above the refrigerator. Throughout the year, if something particularly good, happy, or nice occurs, I write it down on the fridge’s notepad and stuff it in the jar. It is almost like the opposite of a swear jar. It’s so easy to focus on the bad news and events in the world. Contributing to the jar was a little tough at times, but it helped me focus on the good in my life. 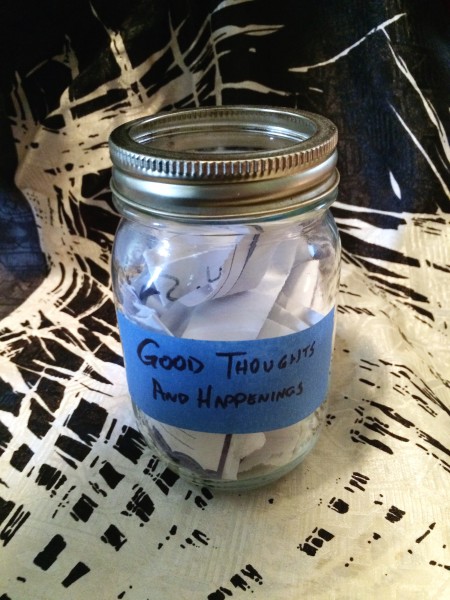 I thought I would share a few of my notes-to-future-self with you. I grouped them together by subject.

Last winter, I got a lot of relaxation during the December 2013 break. December 2013 is technically the year before the time the jar is supposed to cover, but I think I just wanted to prime it with something so it didn’t look so empty. On January 1st, Kim and I went to a local park and played on the playground equipment.

I don’t know if these snow day notes are about the same day or even the same storm. (I’m guessing they’re probably related due to the tear pattern.)

I took a “yoga massage” series of classes at Yoga Union in 2014. It was one day a week for four weeks and ended up being amazing. I had actually wanted to take it when I first heard about it, a couple of years previous. Unfortunately, it was offered at a bad time back then (a weekday lunch, as I recall). It hadn’t been offered since, and the new series was on Saturdays, so I jumped on it.

Kim and I went to Faerieworlds this year. We were there as vendors, which had both plusses and minuses. It was a great adventure.

I finally shipped the iPad version of Puzzle Sidekick last April after wanting and intending to for at least a year. Unfortunately, I’ve hardly touched it since then (despite a glaring iPad-specific bug that I’m aware of). Soon.

During one of our Puzzled Pint bar scouting expeditions, we tried out (the now closed) Produce Row. It was way too busy on a Tuesday night for us to use. The visit, though, introduced the Ipso Facto cocktail to my life. This is an amazing summertime drink. I figured out rough proportions and reproduced my recipe below.

Coincidently, Ipso Facto was one of my favorite goth/industrial clothing shops in Orange County, about 15 years ago.

Figuring out the Ipso Facto propelled me into something I’d wanted to do for a long time: beakers and graduated cylinders in the kitchen. Celery juice is strong. A little goes a long way. My cocktail jiggers were not up to the task of accurately measuring [much less than] 2oz.

Kim and I went to see Gravity on the IMAX screen at OMSI. This is a film that had me literally holding my breath, made even more amazing on that screen. Coincidently, we unexpectedly ran into a friend there.

Yep. Lots of cat stuff this past year. Ebenezer passed away the previous December. To help though this, I received an unexpected Amazon gift from some internet friends.

In springtime, I visited a house full of sphynx kittens and cats, looking for a new naked-cat friend. A month or two later I returned — this time, with Kim. We hung out with cats for a couple of hours, then brought Cornelius home with us.

He doesn’t do it much anymore, but Cornelius would frequently perch on the dormant Roomba. Every once in a while, he’d butt-dial the start button. This is always funny when you’re around to catch it.

Cornelius can be a pretty floppy cat. He enjoys being draped over my shoulder.

There are a several more, but I am not at the liberty to share. Some are related to work. Others are related to family or close personal friends. It is not my place to share these details.

There’s that whole thing about writing wishes on a piece of paper and burning it. Also: fire is fun. It would feel a little anti-climactic to just dump these scraps into the recycling bin, so I set them ablaze.

And the kitchen barware/labware comes into play at the end.

I’m looking forward to the jar-filling adventures and happiness of 2015!

One thought on “A mason jar of happiness”