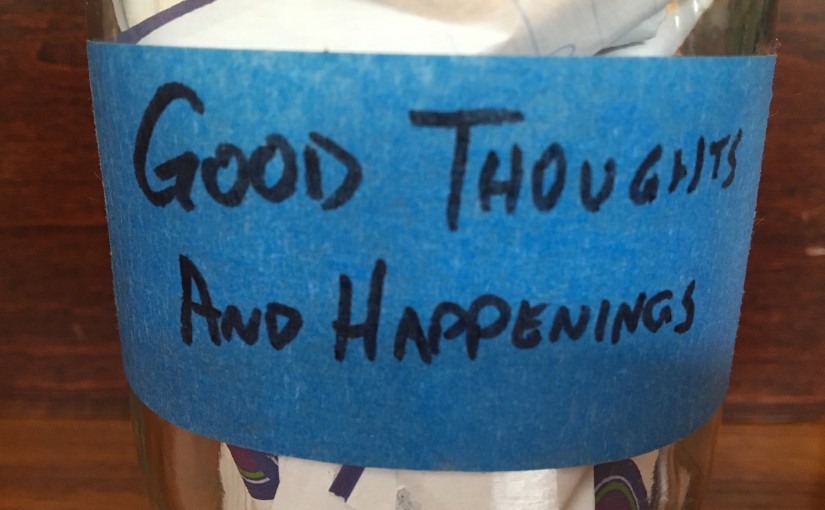 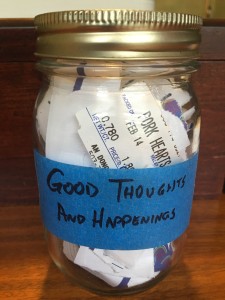 Last year I started a tradition of keeping a mason jar of good thoughts. The recipe is simple. First, keep an open mason jar on top of the refrigerator. It’s a location that I see nearly every day but is also out of the way. Second, keep a magnetic notepad on the fridge. Third: throughout the year, if something particularly good, happy, or nice occurs, write it down and stuff the note in the jar. It is almost like the opposite of a swear jar. It’s so easy to focus on the bad news and events in the world. It’s so easy to complain about 2015. It’s much more difficult (but rewarding) to focus on the good. Contributing to the jar was a little tough at times, but it helped me focus on the good in my life.

I thought I’d share some of those notes with the world. 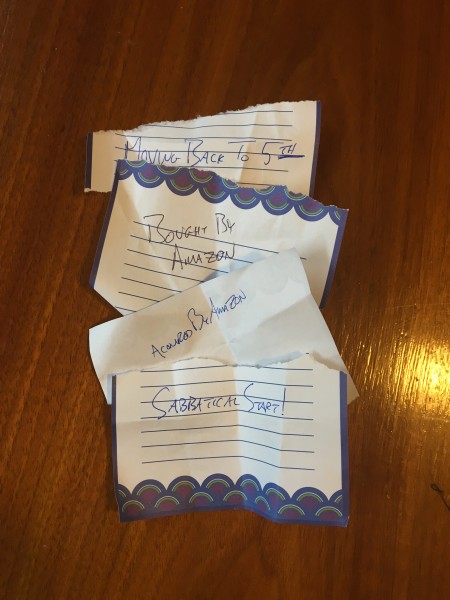 This past year, the company I work for was bought by Amazon. It’s been mixed, but generally good. Apparently it was so good that I forgot I wrote a note about it once and then wrote a second one later! We have several floors at the office and at one point the 5th floor was best. I got moved out of there partway through the year, but moved back again later. At the moment, I’m on a 2 month sabbatical, which started just before Christmas. 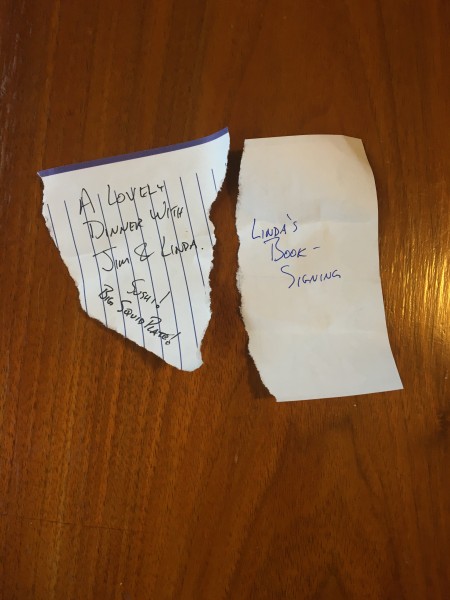 I have some friends that I don’t connect with nearly enough. I got to spend time with Linda Mercury and her friends and family several times this past year. 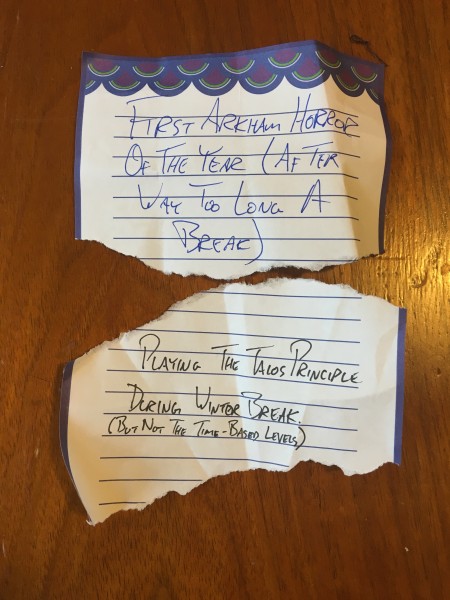 I also have a board game group that sporadically meets, aiming for about once a month. We’ve struggled this past year, but now that I have a decent dining room table, we’ll be able to add it to the rotation of locations.

From the glimpse of just these four notes, you’d think I didn’t spend any time with friends. But the truth is I had all kinds of wonderful times throughout the year. That skewed view is partly because I’ve redacted a few notes. It’s also partly due to me being forgetful and not spending the time on this project throughout the year. I tend to get really good at this at the start and end of the year, then go for weeks or months mid-year where I don’t think to put a note in the jar despite having plenty of reasons to.

I must admite that my slippers (ACORN Unisex Slipper Sock, Grey Ragg Wool, M) are pretty badass. I have no memory of which pants are exciting or why. 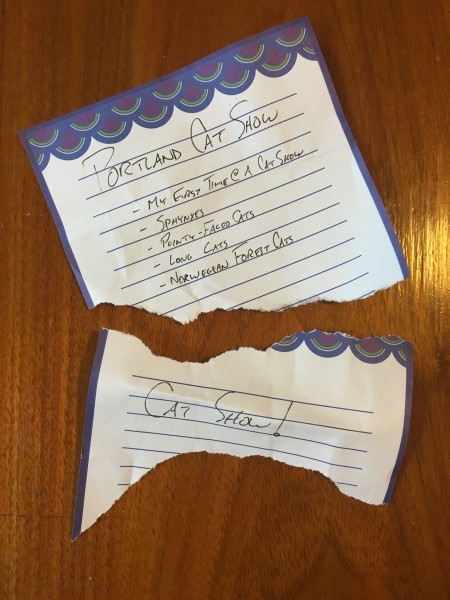 Kim and I went to the Portland cat show over the summer. I’d never been to one and had no idea what to expect. It was fun — apparently enough that I wrote two notes — and I’d go back again at some point, but I don’t think I’d go out of my way to make it an annual event to attend. 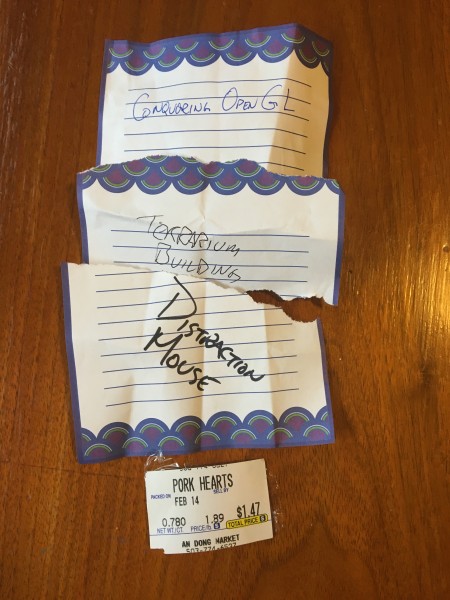 I spent Christmas/New-Years break last year learning OpenGL (as well as playing The Talos Principle, as seen in a previous note). The terrarium building workshop at Pistils Nursery was pretty fun and a great way to spend an evening. Distraction Mouse is a rabbit-fur mouse that I keep under my pillow. When Cornelius gets a little too rambunctious on a morning that I’d prefer to sleep in, I can throw Distraction Mouse across the room. It distracts him enough that he forgets to continue attacking my feet and face. And pig hearts? On Valentines Day? From An Dong Market? What better meal to say “I love you” on a made-up Hallmark holiday? 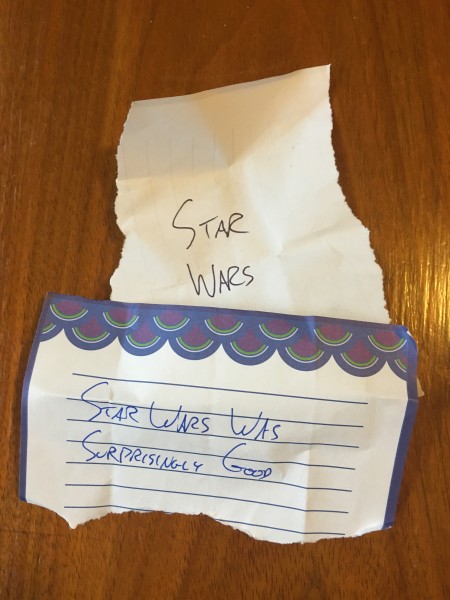 Apparently Star Wars was awesome enough that I had to write two notes. Or I have Swiss cheese brain. 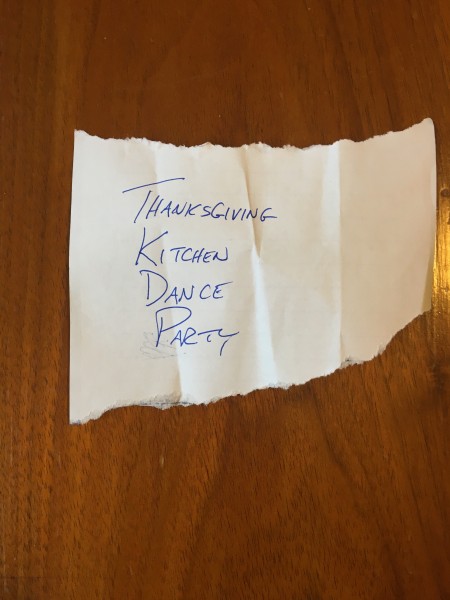 Finally, who can resist an all-day Thanksgiving kitchen dance party? I was sore the next day.

The remainder are not for you.

Adieu to the Old

The second part of the ritual is to say farewell to the old to make room for the new. If I was a scrapbooker, I might paste them in a journal somewhere. Throwing them in the recycling seems anticlimactic, and I’d rather not see a personal note fall out of the recycling and tumble down the street. Last year I decided to burn the notes, so that’s the new tradition. 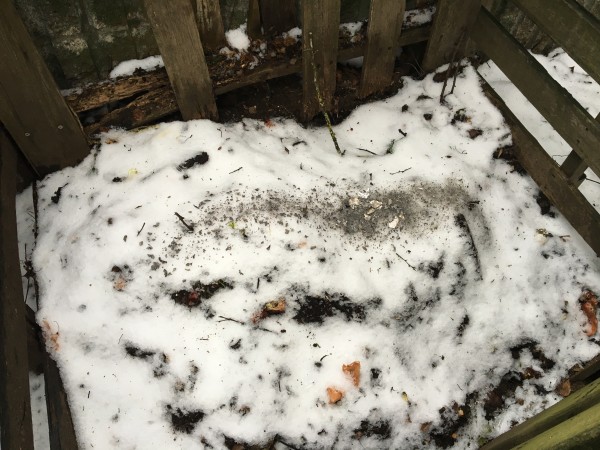