At the most recent Puzzled Pint event in Portland, we put out a survey for all players to respond to individually. (Previously, we had put out surveys with a per-team granularity, but never per-person.) Because Puzzled Pint does not have a great platform for writing blog posts, I thought I’d post the results here, then point to them from Twitter, Facebook, etc. This plan also lets me steal the credit for being the authority behind the survey.

In reality, I believe that Matt created it based on comments from all of us. DeeAnn did extensive proof reading and editing. Curtis did the data entry, and I just made a couple of fancy graphs. And typed up this blather.

So allow me to share the questions and answers with you:

If we start repeating bars, would you prefer: one home bar that we use each month or 3-4 bars we rotate between

Puzzled Pint is getting big. Both Seattle and London are new to the Puzzled Pint family. Both cities are larger than Portland was, that many months in. In fact, Seattle has had attendance fluctuations, with some months rivaling Portland for size. In Portland, our big months are over the summer. Why? No idea. College students are off from school, so have more time? It’s sunny out, so extracurricular activities become more appealing? Regardless of why summer is so popular, winter is our slow season. And this winter we have numbers that rival summer’s. From the months we took attendance, including players and Game Control: 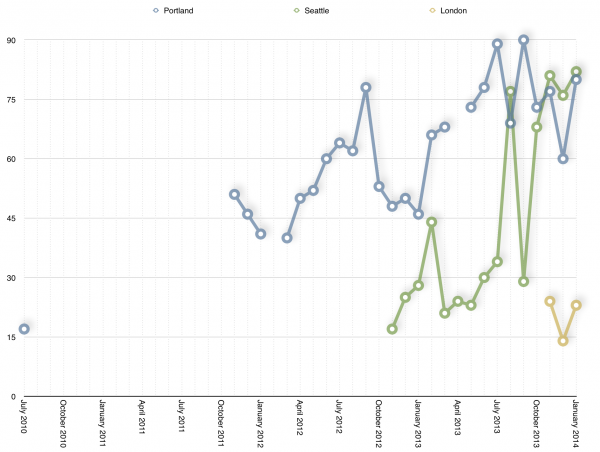 So here in Portland, we need to come up with bars that can comfortably hold 70-90 people (in addition to their regular Tuesday crowd). We have the self-imposed constraint of not repeating bars. We’ve broken this a couple of times in emergency situations, but that is our general rule. This makes it difficult to find bars. There are plenty of bars out there, and new ones opening all the time — this scheme worked out when we were 20-40 people, but starts to break down around 60. Scouting new bars becomes increasingly difficult.

We are dealing with internal struggles in PDX Game Control. None of us really want to give up the unique-bar-a-month scheme, but our size starts to force the issue. We thought we’d crowdsource some opinions and ideas. This barstool-like pie chart shows how you responded to having a single home bar versus cycling through a few: 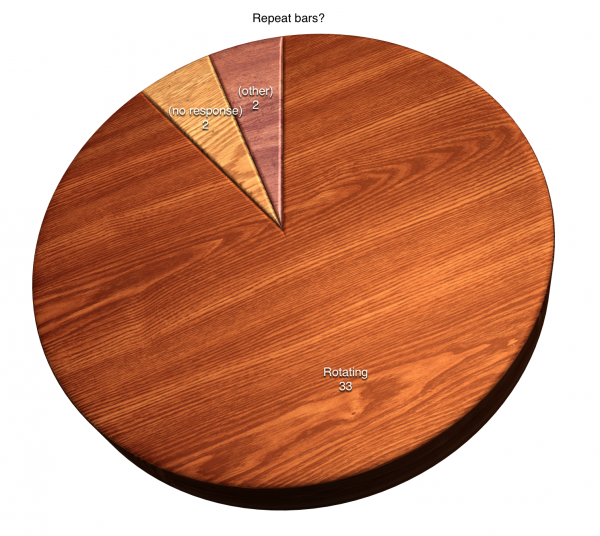 There are a few benefits to having a single home bar. The group (hopefully) ends up on good terms with the managers, who know to staff up on that night, who might offer up specials on food and drink. But it kills the mystique. You can still have a “location puzzle” that resolves to a password you need to give to collect a puzzle packet that night, but that’s more of a workaround versus a true location puzzle. Having a few home bars we randomly cycle through helps keep the location puzzle scheme pure and doesn’t favor any particular quadrant of the city (as long as the bars are spread out).

Several of the write-in comments (a couple are marked as “other” in the graph because they didn’t technically select an answer) suggested opening up the rotation to more than just 3-4 bars. A half-dozen? Ten? Twelve? Twenty-four? One suggestion was to repeat after a year or two, which sounds reasonable to me.

We asked a few questions about travel distance. We know folks arrive at Puzzled Pint from all over. We try to keep it central: simple and quick to get to from downtown via public transit. This keeps us out of Beaverton (no bars near the Max stops) and Gresham (way too far). But what about far NE? St. John’s? These were the responses: 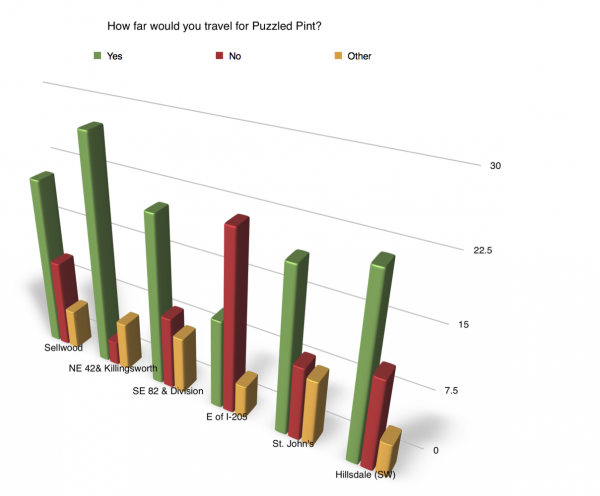 I wasn’t surprised at all by the negative I-205 response. I guess it exists on some maps, but mine ends near there with “here be dragons.” (My internal map is also bounded by the west hills, Woodstock, and Glisan, but that’s just me.) The 82nd and St. John’s responses surprised me. Personally, St. John’s feels quite isolated from the rest of the city. And I don’t mind SE 82nd, as I live just beyond 50th, but understand that it feels distant for many folks.

If we ran on multiple nights, which day would you attend? Monday/Tuesday/Wednesday

What about splitting Puzzled Pint between days of the week? This is a bit of a biased and self-selecting question. Folks that can do Tuesday are present to answer. Those that can’t come to Puzzled Pint because it’s on a Tuesday are not at all represented. Admittedly, this is one of the least popular ideas floating around Game Control — we’re then either dedicating two nights that week, or we’re splitting the team — but we thought we’d float it out there and check the responses. Unsurprisingly, most folks wanted it to stick to Tuesdays, as shown by this barstool-pie-chart, though Wednesdays might work as an alternate? 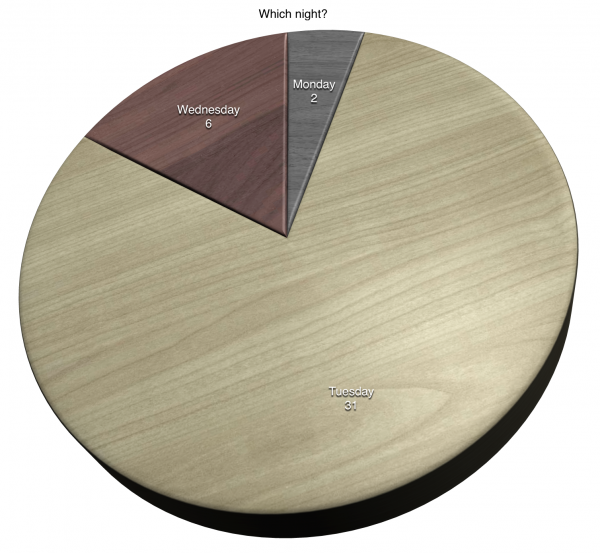 We have had several comments, both on the survey and in person, over the past few months about keeping locations baby-friendly. Fortunately many of the larger locations tend to be more restaurant/pub than dive-bar, so this has sort of worked out on its own. We’ll do our best to continue to be baby-friendly.

One of the more silly suggestions was to start our own bar. How hard can that be, right? Puzzles The Bar, anyone?

Do you have additional comments? Feel free to chime in on Twitter (@PuzzledPint), Facebook, or, uh… in the comments, here, I guess?