Two years ago I built a squirrel feeder. It was a simple little thing with a flap on top and a plexiglass window. It didn’t live unmolested for very long. Squirrels started chewing on the feeder itself!

Over time, I discovered the very bottom of the feeder’s contents would mold. The retaining channels got chewed out and the plexiglass popped out. I used it for a while as a platform to hold food, but more often than not, the contents got spilled onto the ground in a feeding frenzy. Neither squirrel nor bird wanted to try for the ground-based food, given the numerous neighborhood cats on the prowl.

I’ve been putting dried corn cobs on the platform with a small amount of success. I typically put one loosely in the platform area, which would get knocked to the ground and ignored. I also have a long wood screw attached to a loop of wire that I’d use to impale the corn and tie it to the nearby fencepost. This sort of worked, but I had to rotate the corn because the squirrels and scrub jays are apparently not smart enough to flip it around on their own when they’ve chewed all the kernels off of one side.

I thought it was time for a little upgrade. Or, if not an upgrade exactly, a hack. The corn-on-a-spike method was a good start to improve on. I drilled some holes, mounted the screws directly to the feeder, and now I have a three-corn feeder that is  squirrel and scrub jay proof: they can’t knock the cobs onto the ground and they can get at all the kernels on their own. 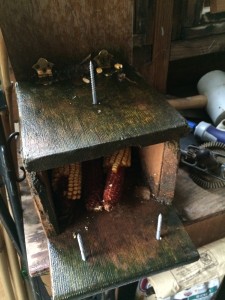 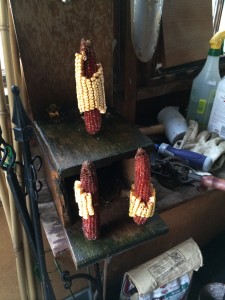 The cobs in the front even do a good job of minimizing the wild squirrel and bird parties that cause peanuts placed inside the main platform area from spilling out onto the ground. 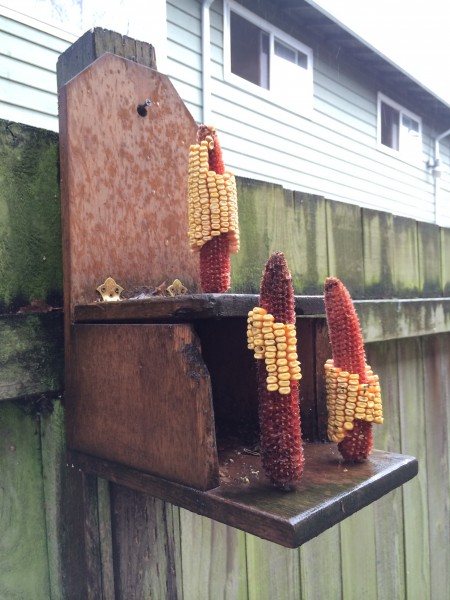