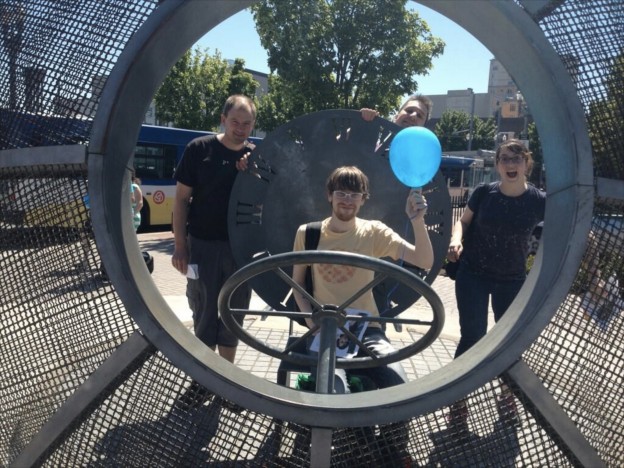 This past weekend was the Portland Afoot game.  This was a sort of transit scavenger hunt put on by Portland Afoot, Portland’s 10-minute newsmagazine on buses, bikes, and low-car life.  The whole event was themed like a murder mystery (who killed Faire LeSequare — that name being an inside joke for local transit buffs) and involved going places, meeting people, and doing things.  You get points for documenting your deeds on Twitter.

Because I planned on taking public transit, I got there early.  Real early.  You can plan for the 40-minute bus-to-Max-to venue trip the night before.  You can’t really plan on having a Car2Go conveniently available in your neighborhood that can get you there in 10 minutes.  So you have this dilemma — you reserve a car at about the time you need to leave the house for the bus, but what do you do with that extra 30 minutes you saved?  Kill time before getting the car?  Show up 30 minutes early?  Something else?  So I showed up early and got put to work unboxing granola bars.

My team eventually showed up, as did all of the others.  Coffee and Sin Dawgs were served.  Team registration was performed.  Waivers were signed.  The event kicked off with a welcome and introduction and then a 70s-era (or 20s-era, it’s sometimes hard to tell) detective showed up.  This detective deputized our teams, told us to photograph evidence, and to use the communications dispatch system known as “The Twitter” to report in and receive updates.

They let us loose into the beautiful day to hunt and gather photos.  The following photos are pulled from our Twitter stream.  Unfortunately, they’re in alphabetical order by description, not chronological order.

4:00 rolled around and we ran out of time, prompting a return to Velocult bikes.  While we waited for the festivities to start, Laura tested a bike or two.  (Did you go back for that red one with hammered metal fenders?!)

The adventure concluded with more theatrics.  Miss Lovejoy was let off the hook because of a postmark alibi.  Detective Holladay was sneaky, but not responsible.  Faire LeSquare had run off to Canada and had simply disappeared, not been killed.

Prizes were awarded, beer was imbibed, and more fun was had.

One thought on “The Portland Afoot game”