I was talking to zheng3 (site, Twitter, Thingiverse) this morning via Twitter and an idea occurred to me. 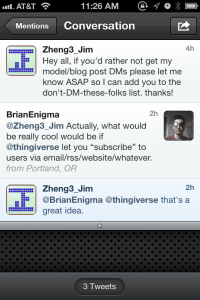 It would be great if Thingiverse had a way to subscribe/friend/follow particular designers.  I already follow the “featured items” via an RSS link on the homepage, but there are a few people who regularly put out great things that are either a little too niche to get featured or are simply overlooked because Thingiverse users design so many great things every day.

Ideally, the mechanism would be as simple as Twitter or Facebook: go to a user’s page, “subscribe” to them, and then twiddle a notification setting that says whether you want notifications only on the website or via email.  Maybe even the email would be instant or queued up as a daily or weekly digest.

But I had a thought.  I’m subscribed to the Thingiverse front page RSS in Google Reader.  Did the other pages have RSS that I just did not notice?  It turns out they do!  You can go to any random user’s page, http://www.thingiverse.com/some_username/things, and there is an RSS link for that person’s contributions.  It may not solve the subscribe problem for everybody, but it works well for the nerds already using RSS.  Just create a folder in your RSS reader of choice and fill it with Thingiverse users using their “things I designed” URLs!

So even if following people is not an official feature of the Thingiverse site, with a little elbow grease (and really, what maker is short on that?), it looks like you can roll your own. 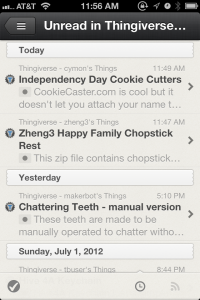