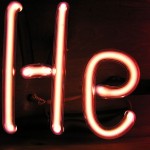 The decentralized Alternate Reality Game (ARG) part means that anyone can contribute to the story and its world. There is no main editor in charge. Anybody can contribute to whatever degree they would like. You can write a story or article. You can draw a picture or take a photograph. You can put up a website. Maybe that website has puzzles to solve to unlock more of your story. It’s really up to the contributors to build up the world and interweave the story.

The story itself is a play on The World Without Oil, a serious ARG that used a similar collaborative tactic to paint the picture of a world that is too dependent upon an ever-decreasing supply of oil. It touched on serious issues and got people thinking about conservation and alternate fuels. The World Without Helium follows a similar storyline, but with helium. It’s not just for balloons: medical imaging, supercomputing, welding, producing computer chips, and all sorts I things. What would happen if supplies ran short?

My first of several weekday wakeup alarms is the clock radio tuned to Oregon Public Broadcasting (OPB), the local National Public Radio affiliate. In my half-awake state, I heard them forward-announce an upcoming story about a helium shortage. And then it got weird. They started to play the prerecorded story, but there was a technical difficulty. It sounded like the tape was messed up. (Do radio stations even use tape anymore? I thought it was all digital now.) Their equipment played back the reporter at high speed. And it was not just high speed, but an ever-increasing high speed, like some sound effect they’d use in a movie to convey the idea of a busted tape player. It sounded like chipmunks. Or talking while breathing helium. After a couple of seconds of this, they apologized and said they’d get the story on later.

Wondering if I was still dreaming, I grabbed my phone and checked the OPB website for the story. There it was. “Helium Shortages Weigh on Oregon Businesses.” The story itself touched on many of the same talking points Steve did when he chatted about the ARG on the Story Forward Podcast.