I first saw the most recent Tron Legacy trailer when jwz posted the video a week ago.  I remember seeing the brief scene when the kid is looking at the computer console and being mainly focused on the on-screen keyboard.  “Oh yeah, I remember that from the original Tron.  They had iPad keyboards long before the iPhone.” But that was about all I took away from the scene.  I watched the trailer again last night, this time in HD, and had to freeze-frame it on that scene,

This time, I focused on the console windows. 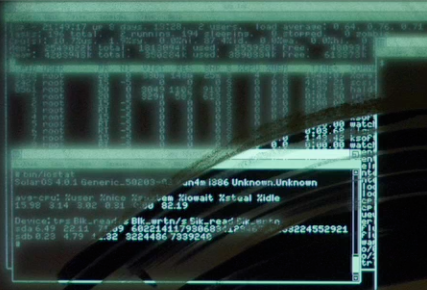 This might be where I become “comic book guy” for a bit and geek out over minor details that mean little, if anything.  If you, yourself, are not a geek, please do not mind my geekery.

I cannot say that I know the mythology of the new movie (and if you do know, please do me a favor and don’t spoil) other than a little bit timeline from the Flynn Lives website for the Alternate Reality Game promoting the movie.  According to the site, Flynn disappeared in 1989.  Presumably this computer is either the same system from 1982 (the original Tron movie) or a slightly upgraded one.  Given this information, I find a few interesting things about this screenshot:

Maybe others can find interesting tidbits, easter eggs, or anachronisms in the screen.  Sound off in the comments if you notice something interesting.

One thought on “The Game Grid is powered by Unix”