Back in ye olden days, when people still used the word “ye” in a non-ironic fashion, folks shaved with knives.  That is, when they shaved at all.  Archeologists have found shaving blades dating back to at least 3000 BC.  In the late 1700s a Frenchman was looking at a carpenters’ plane — that thing used for shaving down wood — and got the crazy idea that a smaller version of that would work on your face.  Those crazy Frenchmen.  That was when the safety razor was born.  In 1901 Gillette came up with the idea of disposable blades.  The blades, of course, were the iconic double-edged blades that everyone recognizes and few people use these days.  For the most part, all razors and all blades were interchangeable.  Yeay for open standards!  In the 1960s, companies introduced blade cartridges.  Under the guise of being great for consumers — you are less prone to cutting yourself when swapping a plastic cartridge versus naked blades — they allowed the razor companies to patent proprietary handle-to-blade interfaces.  Yeay for consumer lock-in!  Er, I mean, boo!  Then came the disposable razors.  Next came the ludicrous blade wars.  And this historic narrative does not even get into the modern-by-comparison electric razors.

When I started shaving regularly, it was with an electric razor.  I tried not to shave often, because, hey, what better what to broadcast a transition into puberty than a scruffy caterpillar under your nose?!  The electric razor was easy to use, and more importantly, easy for my dad to explain how to use.  And he has a big beard and mustache, and only uses an electric trimmer, so that was that.

In my early- to mid-20s, a girlfriend showed me how to use disposable razors, for which I am extremely grateful.  Disposable and cartridge razors not only gave a great shave, but allowed me to stay in the shower an extra few minutes every morning.  (My weak spot is the morning shower.  That and coffee are my power-up to get me through the rest of the day.  Anything I can do to lengthen the shower is a win.)  So screw that “shaves as close as a blade” electric razor junk.  Even the fancy electric razors did not shave as close as a cheap blade.

Last weekend, I picked up a safety razor from that cutlery shop on Hawthorne.  Past the racks of (SCA-approved) Medieval swords, beyond the Japanese swords (and his prized Japanese blunderbuss), and around the corner from the tactical knives (black blades prevent the accidental glint of reflection), was a little glass case of shaving razors.  Because I am quite attached to my jugular, I opted to pass over the straight razors.  I was unsure if I would like using a safety razor, but knew I wanted a brush, stand, and shaving soap because I could still use those with my existing razor.  I opted for a basic model, as opposed to one of the $80 razors with adjustable blade angle.

For the first couple of shaves, I used it very daintily.  I did not want to slash my face (although I did already have a facial laceration that could have been mistaken for a shaving cut due to a cat rebounding off of my face one evening).  As I learned and my confidence grew, I was able to shave more efficiently.  Now, it’s no big deal.  Well, except I am currently experimenting with using it to shave “against the grain” (or perpendicular to the grain) to see if I can get an even closer shave.  Against the grain is a little more perilous with this razor versus the four blade cartridge I have typically used, so there has been a little bloodshed in the past couple of days.

I have now shaved every day for a week.  This is probably a record for me, as I cannot remember the last time I did that.  I expect that as the novelty of this new razor wears off, I will go back to my usual twice-weekly routine.  It has been a great experiment, and I fully expect to stick with this razor for the long-term.  The price and longevity of the blades is great, and I really like the closeness of the shave.  Specifically: $6 for ten blades (double-edged, so it is effectively 20 blades) is hard to beat.

Electric to cartridge to safety.  That has been my devolution in shaving.  Check back in a few years and maybe I will have a straight razors.  A few years more, perhaps a sharpened chunk of flint. 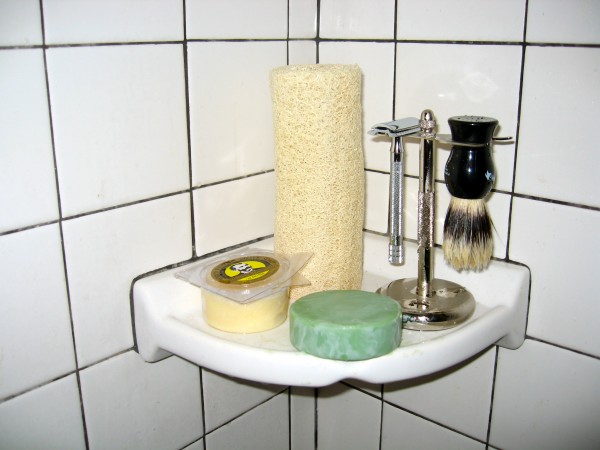 5 thoughts on “My personal devolution in shaving”