After playing with the new Apple keyboard for 5-10 minutes at the Apple Store the other week (the sales folks were curious as to why I was writing what looked like code into a TextEdit window), I decided to get one. The key spacing isn’t a big deal at all–they just squared the beveled edges on regular-sized keys–unless you happen to be someone who regularly hits the edges of keys (and if you do, you’re probably not typing correctly anyway.) The “play” on the keys is the same as my laptop, which is also nice–muscle memory for only one “depth” of keys/keyboard. So I took it to work and hooked it up to my Linux box.

I proceeded to set up key mappings (swapping option and command, for instance), until I hit a snag. The new Apple keyboard has a “fn” key where the “Insert” usually is on PC keyboards. It’s a “Help” key on Apple keyboards, so it’s nice that they killed off that key–it was too easy to accidentally hit and spawn the helper application. 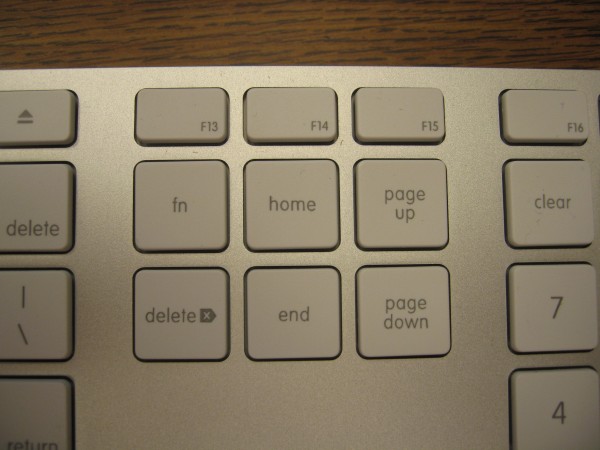 Unfortunately, it looks like this key is hard-wired to other key combinations (the F1..F12 keys and their corresponding brightness, speaker, iTunes, dashboard, etc. functions.) It doesn’t look like it generates a keyboard scan code that can be trapped. This normally wouldn’t be a big deal, but I use the “shift-insert” key combination for one particular operation that I use constantly: pasting text into a terminal window. Middle-click doesn’t always work (it depends on whether the text is in the X Windows paste buffer or the KDE paste buffer, so gives inconsistent results), but shift-insert always does what I want… yet this keyboard has no insert key!

Instead, I mapped that insert functionality to shift-delete (the key just under Fn), which does not make a lot of logical sense, but is a similar-enough and usable key combination that it works well for me. I have been using this for a week or two now, and I like it a lot better than the Dell keyboard I was using previously.