Please note that all blog posts before 8 April 2007 were automatically imported from LiveJournal.  To see the comments and any LiveJournal-specific extras such as polls and user icons, please find the source posting at http://brianenigma.livejournal.com/2007/03/

This is another Hipster PDA report from the front lines. Previous ones are tagged hipsterpda.

A month or two ago, I picked up a shirt pocket briefcase from Levenger. It’s basically a leather wallet and writing surface for 3×5 cards. It’s a fancy Hipster PDA variant that’s useful for carrying around to meetings with clients. While I still use the ghetto binder-clip version for all of my own stuff–for that extra street cred, ya’ know–the fancy version is useful for work-related notes (and for keeping work at work, isolated from the personal Hipster PDA, if that makes sense.)

I noticed that Levenger sells 3×5 file folders that look like your typical manilla 8.5×11 folders, but put through the shinkotron. Because I did not feel like forking over the cash and because they are simple enough I made some myself (PDF forthcoming, if you’re interested.) This lets me jot down notes during meetings and brainstorms, then group similar notes together — like with regular paper and regular hanging file folders, but smaller. It’s also a useful long-term storage for “back of the paper napkin” style notes and diagrams. I ended up getting another cheezy plastic recipe-box style box to put them in, but only after spending a week trying to find a local place that sells nice wooden boxes of the correct size.

I’ve found a flaw in the Sudoko cards that I designed. The flaw is that the PDF is too accurate for consumer printers. I’m finding that most printers, when handling cardstock, get really finicky about everything. Depending on how much paper is in the paper feed and how carefully you try to feed it through, the results could be as much as a quarter-inch off by the time the printer reaches the other end of the paper. It’s that whole thing about small angles growing to large differences if you follow the angle out far enough. Trying to manually get everything to line up each time, then cut things exactly (even with a nice paper cutter), is starting to be a pain in the butt. I actually talked to a couple of local print houses about having someone else do the exact printwork and cutting, but over $100 for 500-1000 cards seems excessive to me. As much as I hate to do it, I may just have to shrink down the size of the grid to account for printer inaccuracies. Another thought was to have someone make (or make myself, if there’s a way) a rubber stamp to just put the grid on regular blank cards, but I have not had much luck in that department. Most stamp companies only want to handle text: return mailing addresses, check endorsements, inspected by #23, and that sort of thing, with maybe a piece of stock clipart. So shrinking the pattern might be my only remaining option. 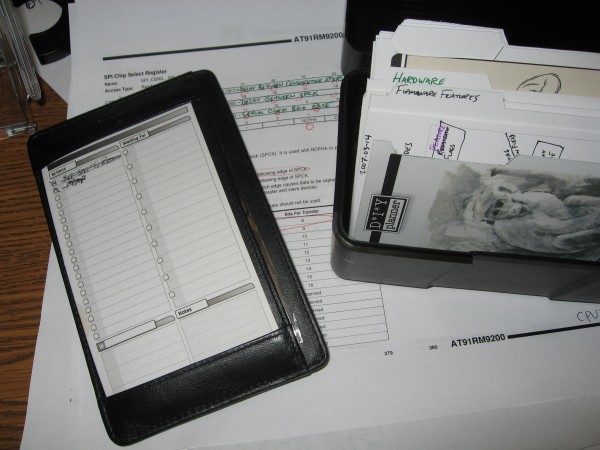