Please note that all blog posts before 8 April 2007 were automatically imported from LiveJournal.  To see the comments and any LiveJournal-specific extras such as polls and user icons, please find the source posting at http://brianenigma.livejournal.com/2007/02/

I seem to have created a monster. If you have followed this journal for a while, you know that one of my hobbies is papercraft — not origami, but more in the realm of engineering, with tabs and slots and flaps and sometimes even basic levers and cogs — you know, like pop-up books. While playing around with a new idea of how to make a good, sturdy set of interlocking flaps, I needed a fairly cubic model. The thought of making a scale model of one of the network switches I design arose and sounded good–certainly more fun and interesting than a blank white cube. Modeling the switch’s mounting brackets correctly would be challenging, but not too challenging, although I was mostly interested in the flaps at the bottom that most people would not see. 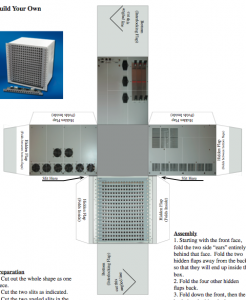 So, if I was going to do this, I was going to do it right. I asked our graphics guy for good images of the switch. I sketched out a rough design, built up an initial prototype in InDesign, and two or three revisions later, I had something decent. The interlocking flaps worked better than I thought and I accidentally stumbled across an improvement that I had not originally thought of.

Today, I brought a few of those paper models to work, mainly to show the graphics guy what I did with the images. Instantly, he got excited and started showing it to everyone. Ideas were put forward of printing them en masse, getting them professionally die cut and scored, including sales/marketing information on the sheet, etc.

So now, everyone is stopping by my office to take a look at the paper model, the sheet it came from, and all that. People are starting to form all kinds of great ideas about what we can do with it. In a way that’s cool, but on the other hand, I have some firmware milestones to hit and don’t necessarily have the time to also do marketing. 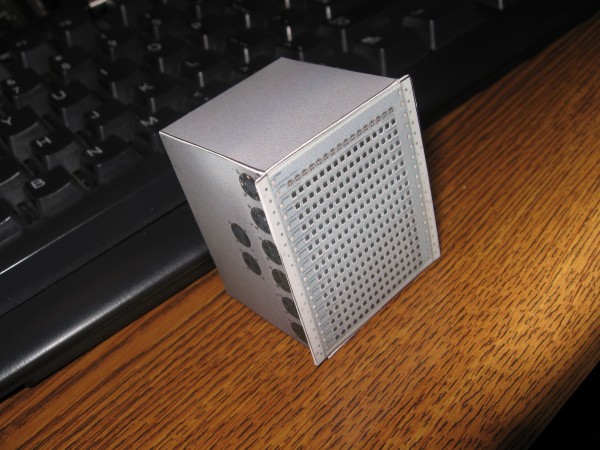