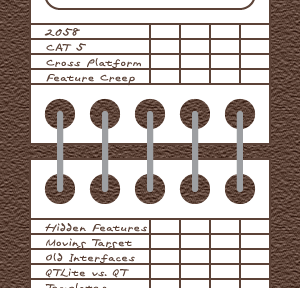 Please note that all blog posts before 8 April 2007 were automatically imported from LiveJournal.  To see the comments and any LiveJournal-specific extras such as polls and user icons, please find the source posting at http://brianenigma.livejournal.com/2005/11/

Our company is moving into a gigantic building early next year. In the current offices, one of the hallways has a floor plan of what the new building layout will look like. One day last week, I took some tiny Post-It notes and a pen and proceeded to creatively mark up the blueprints–something like a cross between Clue and a mad scientist’s secret lair. Today, more people joined in the fun and used colored Post-Its as playing pieces (each with one of our names on it) and weapons (with things like product names and terms like “feature creep.”)

I just finished spending entirely too much time in Illustrator in an attempt to take the craziness to the next level.

The PDF prints quite nicely to cardstock, four to a sheet. There are a couple of odd seams at the very top and very bottom on the screen, but don’t appear on the final printout. The perfectionist in me is still trying to learn what those are and how to fix it.