Please note that all blog posts before 8 April 2007 were automatically imported from LiveJournal.  To see the comments and any LiveJournal-specific extras such as polls and user icons, please find the source posting at http://brianenigma.livejournal.com/2005/11/

Yesterday, I was awakened to the sound of SEAGULLS! Screaching outside my WINDOW! On the SECOND FLOOR! While seagulls were all over the place in SoCal, I really can’t say I have seen any up here–especially 20+ blocks away from the river. Still, there was one perched on the telephone pole, not too far from the bedroom window. 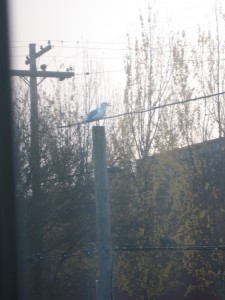 Later in the day, walking to lunch, I happened to pass what I will call “The Inflatable Nativity Atrocity.” Yes — you, too, can adorn your perfectly manicured front lawn with an inflatable Baby Jesus for the paltry sum of $90. 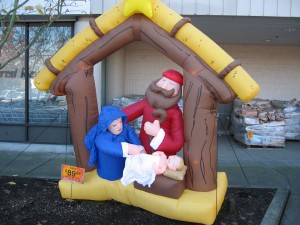 Still later, I came across a freeway sign. This one creatively mixed large uppercase letters and small lowercase letters. Being an old-computer-junk-junkie (well, not so much anymore since I gave away most of my old computer stuff), the NeXT reminded me of a certain failed computer company that got swallowed by Apple and now provides the ObjectiveC framework OS X is built upon. 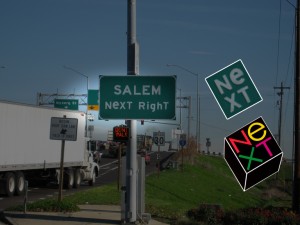 Sparked by one of Phaedra’s posts, Kim and I had a great discussion about women and games this morning. For some reason, we had a whole lot of extra time before having to go to work. I think it is because I actually set up the grind-n-brew on its timer last night instead of fumbling with it in the morning. It probably has more to do with not hitting the sleep button 10 times in a row.

The FCC, despite making me go through a crazy number of unnecessary hoops to access their online system, have actually been very good about letting me renew my license. Even though it is past the 90 day grace period, they are still allowing me to renew without taking tests or paying money.