Please note that all blog posts before 8 April 2007 were automatically imported from LiveJournal.  To see the comments and any LiveJournal-specific extras such as polls and user icons, please find the source posting at http://brianenigma.livejournal.com/2005/08/

Behold, the power of Open Source! My post yesterday, where I was mysteriously griping about something called Errata 11? It was actually griping about that and something bigger that doesn’t have an easy name (a packet buffer race condition, if you really wanted to know.) While I *can* fix kernel drivers, I really hate doing so, plus this is a hard problem to reliably reproduce. Google searches showed exactly ONE person on the internet who uses the same processor (Atmel ARM9) at the same speed with the same general supporting hardware, with the same Linux kernel version (we are using 2.4, not 2.6), with the same error message — back in 2004. I emailed him on a whim, and he told me not only how he fixed it, but emailed me the specific files and FTPd his whole kernel tree. So, if anyone needs a consultant that is great with Linux and ARM processors, certainly check out Bill Gatliff.

In other work-related news, the ninja that Fi gave me by way of SpaceBass is now protecting my desk from evil supervillans. Plus, he has a posse. 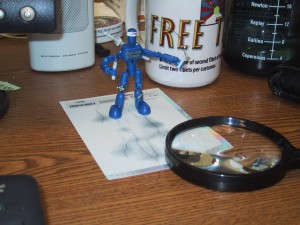 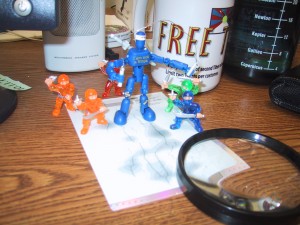