Please note that all blog posts before 8 April 2007 were automatically imported from LiveJournal.  To see the comments and any LiveJournal-specific extras such as polls and user icons, please find the source posting at http://brianenigma.livejournal.com/2005/07/

Recently, phaedra_amunet has been running a bot in the #unfiction IRC channel. The Pie Spy bot basically sits and listens and infers social connections using various social network analysis algorithms, then prints out a pretty chart to visualize them. It does all sorts of things like see who is directly talking to whom and who is using the same big words as someone else, which is an indirect connection. Anyway, it rather sucks because it is a bot, meaning you have to be running it and it has to be sitting in the channel and it can only give you stats and graphs for the time it is connected. My #unfiction log goes back to 2003, and I wanted a way to have it walk through the log offline. I eventually butchered and hacked up the code enough to make this possible, and here is the result: 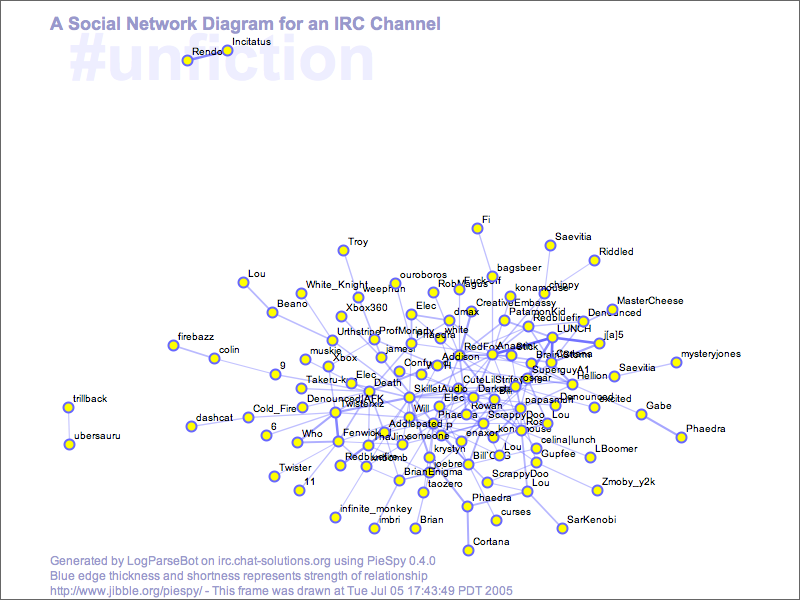 I had a couple of false starts, but once the bugs were fixed, I started the process running Friday evening or Saturday morning. It finished this afternoon. You can guess that I probably will not be running it again any time soon. To get it to run well, I had to make the following changes:

It was interesting to watch as it was running. Various characters from the past (for example, LazarusLong, LiqidCrack, and MageSteff) made appearance, formed various connections, and eventually disappeared. The month I was without a laptop, BriEnigmaPhone appeared, gradually took the place of BrianEnigma, then waned away. The version you see here is up until the log got copied sometime Friday.

Yes, I still have the code. No, it has not been tested on anything but XChat Aqua. No, there is not a user interface–to run it, you have to tweak the code, recompile it, and run it. Yes, a proficiency with a Java compiler would be required to run it.

I would be sort of interested if someone had a *complete* log of #matrix while the Metacortechs game was going on. That took place over a shorter duration and the runtime for batch processing that log would not be as long. I also think the results may be a bit more interesting.