Please note that all blog posts before 8 April 2007 were automatically imported from LiveJournal.  To see the comments and any LiveJournal-specific extras such as polls and user icons, please find the source posting at http://brianenigma.livejournal.com/2004/08/

Flügtag is over and my gallery is online. Eric and BC took pictures, too, so look for more images.

Overall, it was fun. It started really well–you could see the teams and their flying machines. Everyone had high spirits (and was probably full of that other kind of spirits.) There was a big jumbotron TV. There was lots of excitement and energy. It was fun. About half-way through the actual launching event (sorry–my pictures of the launches did not turn out so very well), people started to get antsy. It was hot. There were A LOT of people crammed into the waterfront. The fire marshall said it was at maximum capacity. The actual event went on for about twice as long as it probably should have.

Anyway, the X-Wing team was pretty cool, as was the Monty Python team, the A-Team, Hair Force One, and Alf. Each team came up to the launch ramp, did a little skit (some were imaginative and fun–most were pretty lame), then pushed the vehicle off of the end of the ramp–where most plummeted like a rock into the river below. 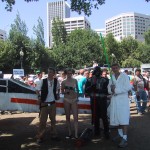 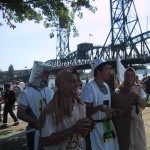 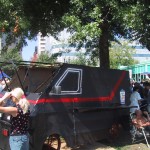 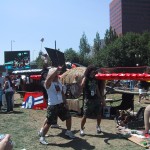 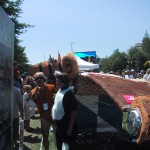 Anyway, I hope they do it again next year–and I hope it is half as long. While I was writing this, a carriage pulled by two horses went by my front window.