I spent about four hours doing a bit of a day-hike around Tryon Park. This time, I took some pretty crazy up/down trails to the extreme southern point (which was closed last time I attempted), then took the relatively flat bike trail back up past the under-construction $800K homes over to the ranger station. Today was hot. Today was toasty hot. Also, today is probably not the day to be out and about if you have seasonal allergies. Those white, poofy dandelion seeds are blowing around and fall from the sky like snow. It may sound hard to believe, but enough of that stuff had landed on and been blown to the edges of the bike trail that it had a fairly wide and about 4cm deep cottony trim–sort of like the fake snow you unroll for Christmas, then roll back up and store in the attic the other 11 months. It is a little cooler now, and I am relaxing back at home after having done some shopping, but still am a stinky, sweaty mess. To steal Boogah's photo idea: 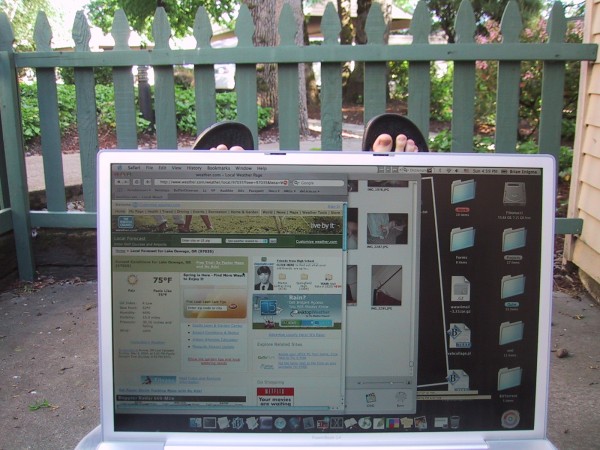 Google Sets is an interesting (but fairly useless) service. You give it a few concrete examples (or “class instances,” using different terminology) and it will deduce the type of set it is and other concrete examples in the set. For example, they start you with “BMW, Honda, Mercedes Benz” and it will deduce they are cars and give you other instances (Ford, Mazda, Toyota, Nissan, etc). I cannot see much practical value in this, but it does seem kind of cool.