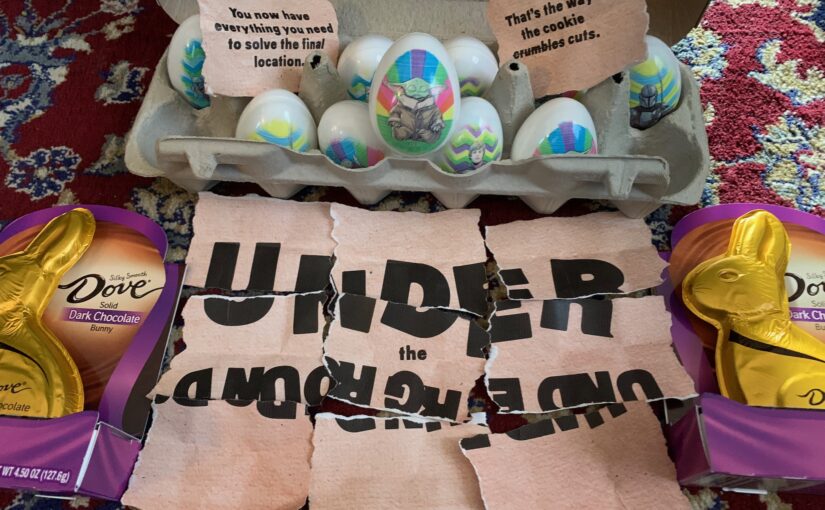 You’re probably familiar with the concept of a scavenger hunt. You might even know of the style of progressive scavenger/puzzle hunt, where one clue leads to the next, which leads to the next, and so on. Folks that do puzzle events such as Puzzled Pint, Puzzle Boat, or the MIT Mystery Hunt are familiar with the concept of a Meta Puzzle, where the answers of several previous puzzles factor into an overarching puzzle. These concepts will become important in a sec.

Although I’ve thought about it, I have never designed an Easter egg scavenger hunt before. I had an aborted attempt in 2020, but got my calendar wires crossed and I thought Easter was a week after its actual date. I’d missed my deadline. This year, I figured I’d put together a simple one for Christine. (Simple mostly because we’d be doing it before coffee kicked in!)

The initial idea was to hide plastic eggs around the house, each with a paper clue inside that leads to the next egg in the sequence. I wanted the final location to be larger than an egg: a pair of chocolate bunnies. I thought it might be a little anticlimactic to have the final location just be another location clue like the others, which is where a meta puzzle comes into play. I decided I could print the clues in a grid on parchment paper, with a rebus puzzle spanning the entire back, then rip the grid into individual clues for the eggs.

Over the course of a week, I’d jot down location and clue ideas, narrowing it down to nine: enough to fit a 3 × 3 grid. When the rubber hit the road, and I started designing a first draft of the clues and parchment for real, I ditched the rebus in favor of a more direct message, in a large whimsical font.

Although outsiders might find several clues opaque, they all mean something uniquely solvable to us. That’s the benefit of putting on a puzzle hunt for a single person or a small, close-knit group. You can lean on shared experience and “inside jokes” where you wouldn’t otherwise.

Only after finishing the design and layout, when I went through a mental dry-run of how the hunt would play out, did I realize I kind of needed a “final” egg that doesn’t (directly) lead to a new location, but instead hints toward the meta puzzle. “You now have everything you need to solve the final location.” I also didn’t want to sacrifice one of the 3 × 3 grid-with-meta as the first egg: the trailhead of the puzzle hunt, easily seen, sitting out in the open. Rather than rework the whole grid, I just added those as two additional clue papers (unrelated to the meta, nothing printed on the backside). That’s 11 eggs in total (3 × 3 = 9, plus two more), one short of a dozen. That bugs me, but didn’t bug me enough to redo everything.

Were I to make another puzzle egg hunt, I might have started with a 4 × 3 grid and worked a starting puzzle and end notice into the design rather than bolted them on at the end.

Despite a distinct lack of playtesting and my worry surrounding that, the hunt went off without a problem. The final clue (hinting at the basket where we keep the mail) needed a Google search of the words of the Postal Service Creed, which is totally fair and fine. Chocolate bunnies were found and M&Ms were consumed! (A single dark chocolate M&M being packaged with each clue.)

Although Christine noticed the printing on the back of the clues, thankfully she decided it was recycled paper and didn’t think much of it. Although it would break the spirit of the hunt, the message on the back was easily backsolveable, even with several missing pieces.