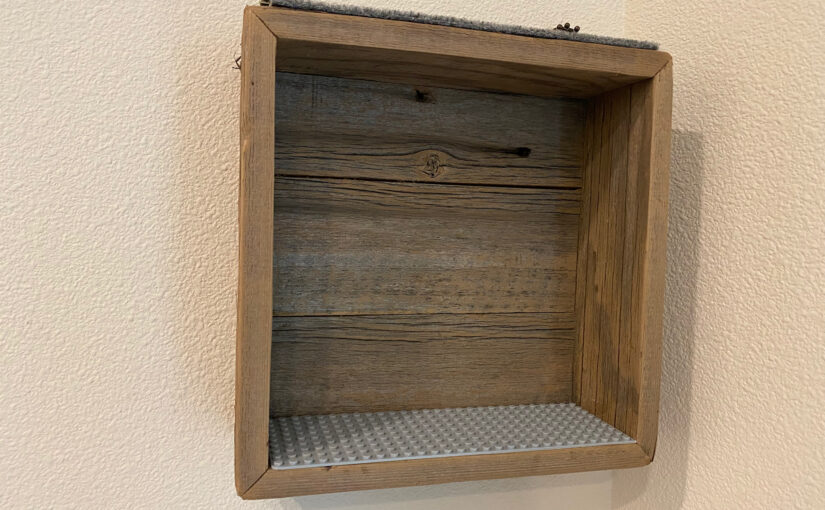 When designing Ravencourt Cottage, our weird outdoor window bench left some void space above the picture window. Christine noticed it during framing, and instead of walling it off, we had the carpenter open up what would otherwise have been wasted space. The thought was that we could arrange some stairstep shelves for cats to climb up into what we now call the Crow’s Nest.

The shelves themselves have gone through a couple of revisions. I added extended wooden platforms to the top one and the coat rack on the adjoining wall. They now all have carpeting. I swapped out the mounting hardware for 100lb picture hangers, after a little drywall mishap.

The big remaining problem was: what to put in the picture boxes? It looks like there should be something inside, but what could we add that is visually interesting, but isn’t fragile enough to get destroyed every time the cats are a little acrobatic and rough? A few weeks later, it occurred to me: LEGO!

When ordering a model, I threw in a simple gray baseplate.

After a little bit of measuring, I used a straightedge and a utility blade to carve out appropriately-sized pieces of the baseplate. (The plastic used in the big plate is a little softer and more flexible than the ABS used in smaller baseplates.) One of the cut pieces did not perfectly fit because of imperfections in the wood, so had to be sanded down a bit. I made sure to cut each so that the visible front edge was the actual manufactured edge of the baseplate.

I used double-stick foam tape along the width of the back to affix the baseplates into the picture boxes. Because there’s a certain thickness to the foam, but it was only along the back, that let the front of the baseplate flop down a bit to sit flush on the front of the picture box ledge. I wasn’t sure how well this would work, so I went with the tape. I may revisit that decision and use a more glue-like adhesive.

I think they worked out pretty well, and they’ve mostly survived the cats. They will let us play around with the three scenes, depending on mood and season.

(For what it’s worth, the backdrop in the above box is part of the cardboard shipping container for Wilderton non-alcoholic distilled spirits. It fit and I liked it enough to stick it in there.)