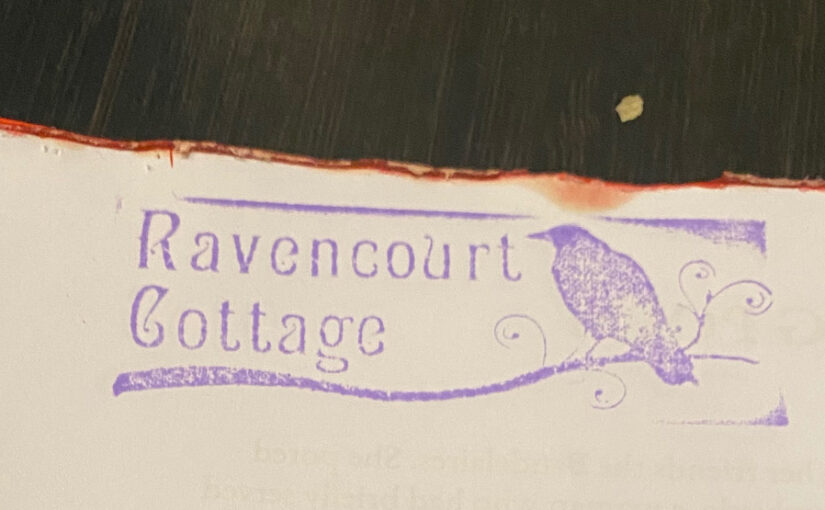 Throughout this past plague year+, Christine and I have been playing a lot more at-home puzzle games — things like Puzzled Pint, Puzzle Boat, Panda Magazine, and photocopying sections of the Hincks Gazette (so we can both work on it). The printouts being single-sided, this leaves us with a lot more scratch paper than normal. Christine has always split these into quarters and stapled a corner as little makeshift notepads. But this time she had a thought, did a little research, and found it’s actually not too difficult to bind them across the top, like a “real” manufactured notepad. It’s just wood glue and food coloring!

She made a few as a test, and they worked well. We each had one at the desk, one in the kitchen, and others scattered around the new cottage. But that got me thinking… We have this general idea that we’d like to use the cottage as an Airbnb in the future, and we christened it with a wonderfully atmospheric name, so why not turn these notepads into the equivalent of hotel stationery? I’m no stranger to making custom stamps on the laser cutter, so set off to make a new one.

First, a graphic and typeface design in Illustrator Affinity Designer.

Next, I took that vector and used it to 3D model a backing for the stamp. Although I love stamps with long handles, that style only holds up well in wood. Plastic works best when used as a backing block.

Hitting the print button on both devices got me the pieces to assemble.

You can spot my first mistake in the photo on the left. I accidentally cut the design as-is (instead of mirrored) which would cause the design to stamp in reverse. The second mistake was the E6000 glue. It dried lumpy, which resulted in a splotchy reproduction. I ended up having to peel off the rubber, attach it with crazy glue, then squish the whole thing under the 20lb two-volume Far Side Collection overnight.

But finally! A good stamp! A few months back, we retconned the name of the main house to Ravencourt Manor — to thematically match the cottage. I made a second stamp for stationary for that house.

I went back and stamped our existing notepads. We pre-stamped the pages of the next batch of notepads before assembling and gluing.

One thought on “Cottage Stationery”