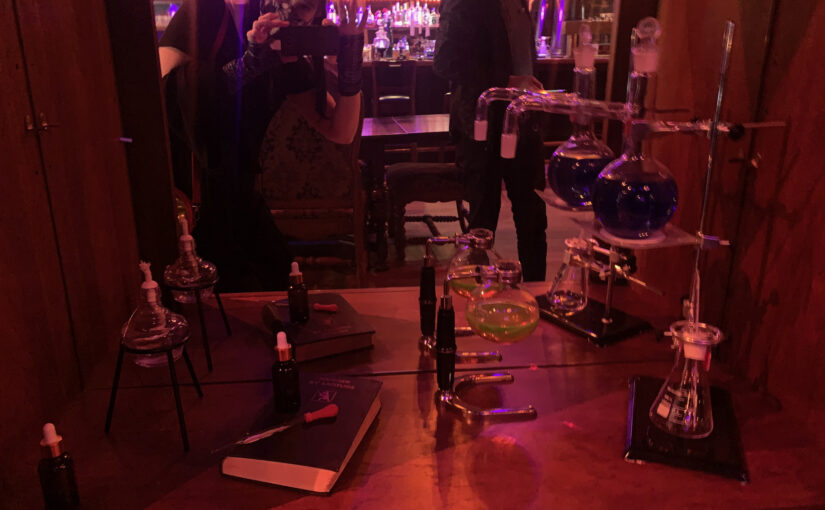 Folks that know Christine and I or who have been reading this blog for a while know that we have a special place in our hearts for The Cauldron. This is an immersive Harry-Potter-themed bar/experience that pulls in just enough from other fantasy stories to not get attacked by lawyers. You don robes and craft cocktail potions. Their initial London location is what got me tinkering and us thinking about hosting an interactive halloween party. Our Potions Party ran for two years before the pandemic. We visited the London location not long after it opened, and hope to hit up Edinburgh and their new Superhero-themed bar (which I admit is not my cup of tea, but I’d like to give it a try).

But this blog post is not about that bar or our parties. This is about a new bar right here in Portland! Raven’s Manor just opened downtown and it’s been getting some good press. I learned of it from a Willamette Week article a couple of weeks ago. It is a little bit haunted mansion, a little bit mad scientist. It’s a little bit bar, a little bit cocktail lounge, a little bit mixology class, a little bit escape room, a little bit goth-club-for-normals. But it is a whole lot of theming and immersion. From the moment you step through the inner doors, you are absolutely steeped in victorian goth horror.

We started our evening with the Elixir Experience. You have to sign up for this ahead of time, since many of the popular timeslots are booked out days, if not weeks, in advance. It started with some backstory of Dr. Raven, his lavish dinner parties, and his gruesome experiments in the basement lab. We couldn’t get in because the dungeon was locked and required a key. Fortunately, there were clues about. Access to the dungeon was a mini-escape room — a scavenger hunt for clues followed by a puzzle or two. It was a fun start and got everyone in the mood. I suspect it also probably normalized for folks arriving late (as people do). Once solved, we got to put on bloody lab coats and descend into the basement lab.

There was a menu of four possible drinks, and we got to choose two — two for our party of two people to share, not two drinks each person. It makes sense in retrospect but was a little confusing at the time. Both of our drinks involved fire. We’d hoped to make two each (covering all four options) and share, but you end up using the same apparatus to make both drinks at once. And both of our drinks involved fire!

The first drink was the Isotope. It involved mixing, shaking, stirring, pouring, and finally lighting the beaker on fire! Using tongs (hot glass!) we then poured it into individual erlenmeyer flasks, pre-loaded with witch’s hearts (dry ice), and drank with bombilla straws. (Those witch hearts can bite you with their icy chills!)

I forget the name of our second drink, but it involved a little percolator / gravity-syphon thing and a bunsen burner. I suspect someone who’s more fussy about artisanal coffee than me might recognize it. As best as I can guess, given the fun fictional ingredient names, we used this to first make butterfly pea flower tea. We poured that into martini glasses, then shocked that with something with a low pH (citrus juice?) for a beautiful color-change. (The lighting in the lab made the color shift a little less distinct, but it was still cool to see!)

When the lab was through, we shed our labcoats and returned upstairs to the land of the (mostly) living. The downstairs elixirs aren’t on the upstairs menu, but there were plenty of drinks to choose from. (At one point I went off-menu and ordered a thematically-appropriate Corpse Reviver #2.) The food menu was outstanding, and very accommodating to vegetarians and vegans. Our favorite was the goth grilled cheese (Grilled Cheese of Darkness).

The food and drink were outstanding, the staff was friendly, and the environment fantastic. It was a well-spent eventing out, and we will return again soon.