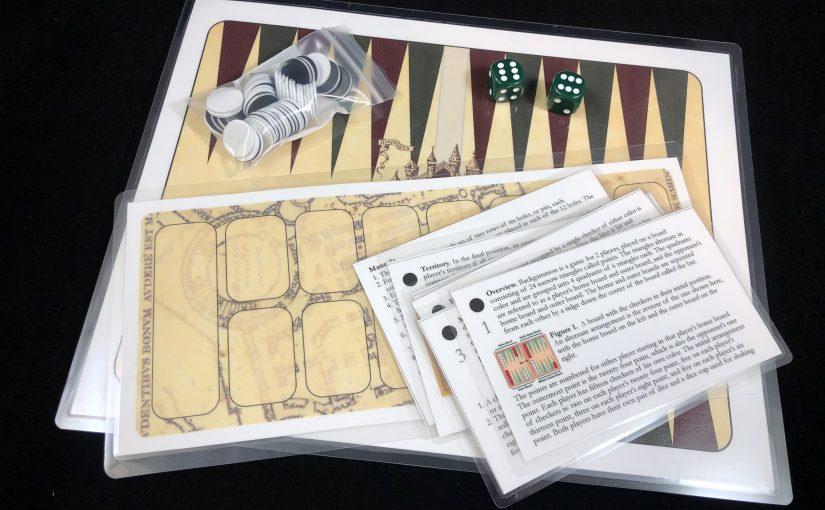 At the time I’m writing this, I’ll be traveling to France in a couple of weeks, culminating in a week at Paris Disneyland, to meet up with my love, Christine, who is already there. (This post is pre-scheduled to appear after I arrive, so as not to spoil the surprise. Shhhhh!) We have a lot scheduled, but will also have some downtime. In our spare time at home, we’ve been playing a couple of board games (or board-game-adjacent activities), but I’m not about to cart them in my luggage across the world and back. There are electronic equivalents of many games, to be played on the iPad or iPhone (do people still play Words With Friends?) but I really enjoy the tactile feel of a physical game.

There are plenty of “travel games” out there. They’re usually kind of bulky for airline carry-on, often in fold-up plastic cases that double as a game board and parts storage. They’re also often a little too small and fiddly to use in practice, and just not generally of high quality. The closest thing I could find to what I was looking for was a roll-up checkers mat, but really, who wants to play checkers?

I set out to make some game boards that are literally flat-pack, with pieces could be used for multiple games and that are (hopefully) robust enough to stay on the boards. At least indoors. I hope. And don’t jostle the table too much. And because we’re big fans of Harry Potter, I had to theme it after the Marauder’s Map.

First things first, I set out to find games that hit a few qualifications:

I narrowed down my list to backgammon, go, and mancala. Othello almost made the list, but that requires a ton of pieces. (As it is, I may not have enough for certain configurations of go.)

Backgammon requires two die. The rest are diceless. I laser-cut some pieces from two-sided acrylic — black on one side, white on the other.