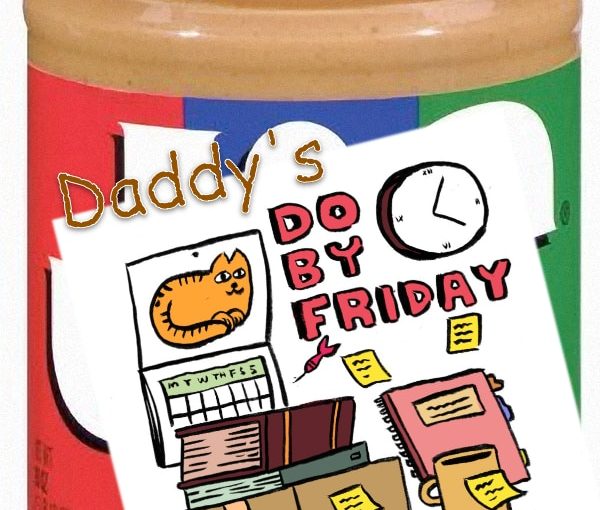 No, not the creamy or crunchy sandwich spread that rhymes with “gif.” I’m talking about a more obscure usage of the term that you won’t find in your Merriam-Webster. You see, there’s a podcast I listen to, Do By Friday. They “challenge yourself, challenge your friends” every week. The hosts perform a task, watch some media, try a weird gadget, or work on being mindful in some strange and quirky way. It’s a fun and funny show that’s more about the interaction between the hosts than the actual weekly tasks. Because people are human, they sometimes fail to do the task, and that has come to be known as “peanut buttering.” Why? I have no idea.

I’ve been listening to the podcast since the very beginning and figured I missed something or just forgot. I’m forgetful. I thought maybe it had something to do with Bojack Horseman, but haven’t watched enough of the show to get the joke. I just let it slide. Until this week.

This week, on episode 99 of Reconcilable Differences, Merlin — one of the hosts of Do By Friday — admitted that none of the hosts remembered where it came from. John — the other host of Reconcilable Differences — had a theory. He thought there was an episode with a discussion on safewords, and that peanut butter came up as a phrase in that context. And then at the end of the show, when reviewing the results of the previous week’s task, someone yelled out the safeword as a jokey way of saying they didn’t do the challenge.

There was some chat about how some listener could go back and listen to all the episodes for where it was introduced. While I’ve had a few thoughts about going back and listening to old episodes to track down “peanut butter,” simply for my own gratification. Ain’t got no time for that.

This is where I should disclose that I’m an engineer for a company that got acquired by Amazon a few years ago. While I feel like I don’t have enough time to go back and listen to old episodes, I am in a position where I know about cool services like AWS Transcribe. When I first played with Transcribe last year, the results were laughably terrible. But the AWS machine learning services improve over time. I did a test run of a Do By Friday audio file the other evening and found that it has improved significantly. So maybe instead of listening to all the Do By Friday episodes, I could force an AI to do it for me.

Instead of listening to all the Do By Friday episodes, I could force an AI to do it for me.

I grabbed the RSS and downloaded the audio files. We’re talking 1 week, 6 days, and 4 hours of content. Nearly two weeks of audio. Can I reiterate? Ain’t got no time for that.

I scripted up a way to feed those into AWS Transcribe, 10 files at a time (due to account limits) and pull out the results. Those results come back as json — containing both a solid block of text and exact timecodes for individual words. The first is great for searching and seeing context. The latter is great for establishing timecodes.

I did a quick grep through the results for terms like “peanut,” “butter,” “peanut butter,” and “peanutbutter” with promising results for all but the last form (compound word), but nothing jumped out at me as a possible source. Because I’m a lazy engineer who isn’t getting paid for this, and because I didn’t 100% trust the machine-translation, I decided to focus on just the term “peanut” and manually look at it in its surrounding context. “Peanut” appears 89 times in the 122 episodes I have, but really hits a good density and per-episode count in the later half of the episodes.

If you’re a data nerd, you can download peanut.csv. This holds the episode number, timecode, and surrounding text of all “peanut” utterances. You can also skim through it and see for yourself how wonky machine translation can get.

The first few times peanut/peanutbutter is used, it’s fairly innocuous and not at all related to the “failed to perform” definition. It’s dogs and Reese’s. The episode links are pointers within episodes, using Marco‘s podcast player Overcast, which lets you generate that kind of deep link.

Episode 007, Splash Mountain, 00:44:36 : “We’re used to having dingling dogs and dogs are dumb-dumbs. They’re really easy to get along with. And you can make them eat peanut butter and it’s hilarious.”

Episode 013, The Dust is Your Daddy, 01:11:05 : “Alexa, update my Google Glass when my thermo peanut reaches optimal efficiency.”

Episode 027, The Bentley Boys, 00:05:34 : “When I was doing client work, I would also give three designs, but I feel like I learned that if you give anybody more than one thing to look at, they’re going to make a Frankenstein… The worst moment in my life, when the client goes ‘It’s like peanut butter and chocolate.”

Episode 034, The Duck Goes Coin Coin, 01:01:03 : “You try to combine these two things. You put your chocolate, your peanut butter together, and it’s frequently a mistake.

And so we’ve found the answer, right? Episode 50 was the first instance of using “peanut butter” to indicate skipping out on a challenge! Excellent! (As an aside: AWS Translate picked that up as “peanut voter.” It’ll be a while until Skynet takes over.) So… uh… what does it really mean? I still have no idea. I feel just as empty and confused as I was before embarking on this project. I feel like there’s perhaps more backstory that didn’t make it to the podcast about why “peanut butter” made sense in that text message. Or that Transcribe didn’t correctly identify “peanut” in some episode between 44 and 50. Or that it was in an aftershow episode — which I subscribe to, but omitted from this project because not all of you subscribe.

I feel just as empty and confused as I was before embarking on this project.

I thought, by the end of this, I’d feel good for having found the answer, or satisfied that there was no actual answer said on the edited podcast. Instead, I feel like I have this Schrodinger-Heisenburg-uncertainty answer that is technically correct but doesn’t actually answer anything. So now I share that with you. Peanut Butter.

If anyone feels like doing their own analysis with my data, feel free to download do_by_friday_transcripts.zip (29MB), which holds both the raw transcript text and the json word-timings.

Update: A reader named Jason left a comment on this post, and @MaxTemkin replied on Twitter that the term itself is from the card game Bullshit. (I’ve never heard of the game, hence my confusion.) That’s its pre-show origin, and it sort of then grew into its own thing over the life of the show. So now Merlin’s text makes much more sense.

One thought on “Diving Into the Origins of “Peanut Butter” [Updated]”

Leave a Reply to Jason from Discord Cancel reply