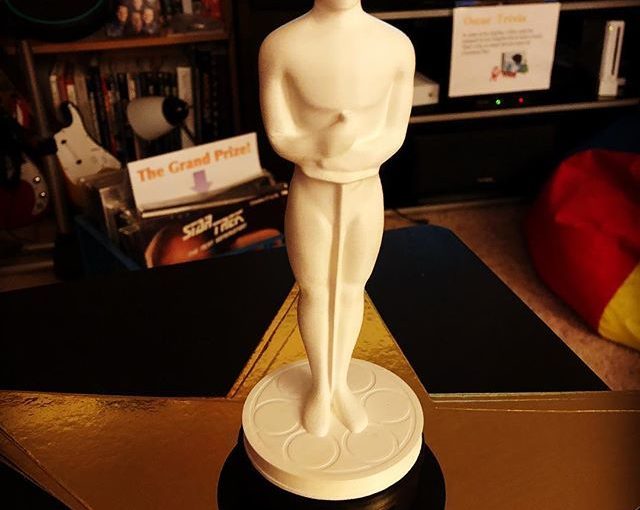 I have a friend who’s been hosting Oscar parties for as long as I remember. They’re always big ordeals, with acceptance speech bingo and a predictions guessing game — both with prizes.

A few years ago I downloaded a 3D model of the Oscar from Thingiverse¹. The 3D printer I had at the time just wasn’t quite up to the task. Between problems adhering to the build plate, warping due to different cooling rates, and droopy corners due to lack of build support (or rough, crispy corners due to build support), I never got a print to complete to an acceptable quality level.

Enter the new printer, the Ultimaker S5. This printer is not only reliable, but came with water-soluble filament for use as build supports. Printing the Oscar worked like a champ, with zero intervention or worry from me. Hit the “print” button and 22 hours later, you have the upper part of the award.

The build support doesn’t exactly “dissolve” so much as “turn into snot.” It’s a little gross. It took some time in warm water to fully dissolve, with a little help from a toothpick in the tighter, um, crevices.

A couple of days later, I fumbled and dropped the Oscar. Snap.

I used a default value for the infill (“gradual infill”). This increases the infill from bottom to top. I suspect this caused the ankles to be more fragile than expected. I decided to reprint with a constant 40% infill.

Next, I printed the base in black and affixed a label, then we were ready to go.

The party, as usual, was great. The Oscar was a fun addition.

¹ I can no longer find the specific model I downloaded on Thingiverse. There are a few other statues, of lesser quality. I don’t know if this is because the author pulled it or there was a DMCA request. Because of this, I also don’t know what license this model was shared under. I’d like to link to or publicly share the 3D files, but am unable to do so for those reasons.