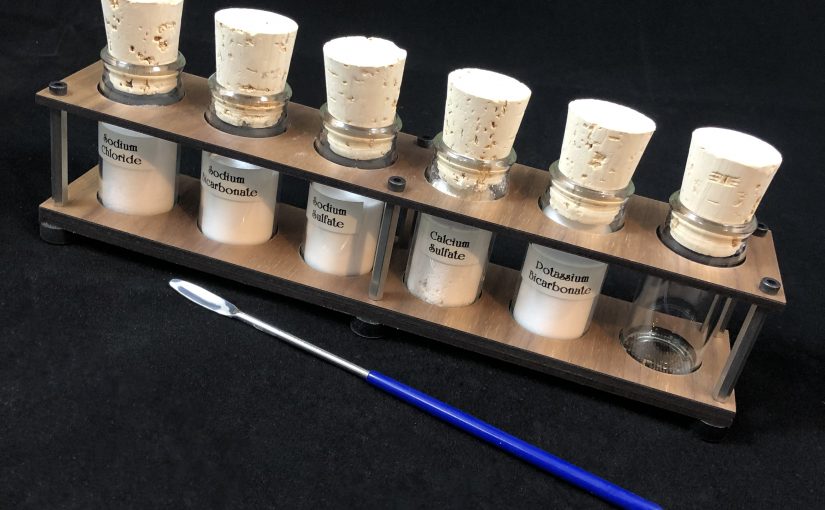 In recent weeks, I’ve upped my game on mineral water exploration and experiments. I’ve had a SodaStream for almost ten years, and for a long time I barely knew the difference between seltzer, soda water, club soda, and tonic. (Hint: two of those are the same.) Let me share with you what I’ve learned and what I’ve built in the process.

Back in the day, I made some weak attempts at club soda, since you can do that with carbonated water and a tiny bit of salt and baking soda. It was okay, and not a terribly reproducible non-recipe of just adding pinches of things. Last year, in chatting with someone in the XOXO Slack, I learned of a local tech company that has not just beer taps in the office, but also mineral water taps. They make their own. This conversation then led me to a book, Fix the Pumps, primarily about making old-timey sodas (which sounds amazing), but also with a chapter on various sparkling mineral waters. Do you want Perrier? All you need is the right ratios of calcium carbonate, calcium sulphate, sodium chloride, and silica. I know a lot of these reverse-engineered mineral water recipes are out there on the internet, but this book acted as a catalyst to start from. Well, to eventually start from.

As I said, that was about a year ago. A few weeks ago, I finally ordered some food-grade chemicals and a little micro-spatula to help measure. Since I was making individual drinks or 1 liter bottles, the bags of minerals and salts were a little too bulky to comfortably deal with. I figured I should put together something that would work better for me and also look nice in the kitchen.

That was my second design. The first had a lot more interlocking wood pieces, but barely made it through cardboard prototyping once I realized I had those metal standoffs, which would give it a very utilitarian and industrial look, offset against the elegant wood and glass.

The design itself is simple. There are two layers of wood at the bottom, a solid one as a base and the other has bottle-sized holes to prevent the bottles from wiggling around too much. That other is repeated at the top.

If you want to build your own, my parts list included:

Were I to do this again, I probably would have added some holes in the test-tube/bottle rack for the spatula/spoon to stand upright alongside the bottles. In fact, I can still do that, even without lasers. I just need to disassemble and drill a couple of holes.

As for the actual mineral water flavors and combinations… I’m still experimenting. I’ll report back if I find anything outstanding.