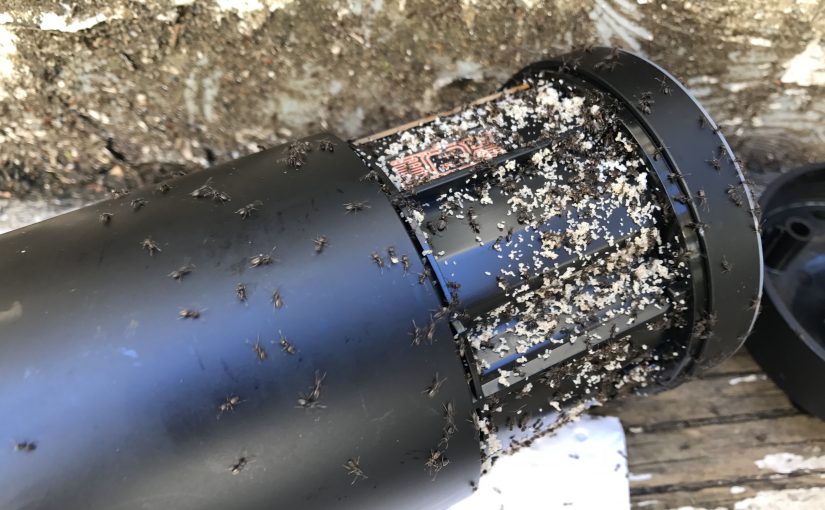 A few weeks ago, I was preparing to travel. I have two lists I perpetually maintain for trips. One is a packing list of everything I will need (clothing, toiletries, chargers), stuff I might need (swim trunks, sunscreen, Fire TV Stick), and a separate appendix for camping. Overall, it holds almost 200 items! The other list is full of tasks to complete before leaving, like a pilot’s pre-flight checklist. Take out the trash and compost. Set the thermostat to “away.” Suspend the newspaper delivery. Load TV and movies onto the tablet.

One of those pre-trip tasks is “unplug the Echos.” I don’t need Alexa mishearing a cat or the catsitter and deciding to order something expensive or jack up the thermostat. As I went to unplug the one on the television stand, I was greeted with the following sight:

I had no time to properly deal with it. I got rid of as many as I could, then put it in a ziplock bag. I assumed they’d starve or suffocate by the time I returned, and I could pop open the Echo and hit it with some canned air to clean out the carcasses.

Fast-forward a week. There are a lot of dead ants in the bag, but there are also still active ants in there, too. I pull the Echo out of the bag, spray it down with canned air, to try to get them out of holes (with a general amount of success, mind you), then put it in a fresh bag.

Another week goes by, and it’s the same story. This was last weekend — Easter. I figured it was time to pop it open and investigate the innards. That was, perhaps, a mistake… 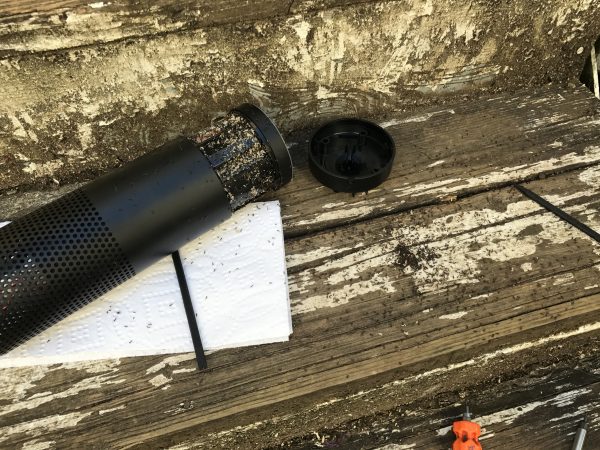 It was positively infested with both ants and ant eggs. HAPPY EASTER! YOU’VE FOUND THE EGGS! The ants had decided to colonize. I tried to clean it out with more canned air, but wasn’t too terribly successful. I had no idea how to properly deal with this, so I left it out overnight.

Surprisingly, when I glanced at it in the morning, it had been knocked over and was almost completely clean. There were still some eggs and ants but it looked vastly better than it had the previous evening.

Had the ants vacated, taking the eggs with them? Did a trash panda find a ready-made snack of canned ants? I have no idea and don’t want to think too hard about it.

BUT! — there were still eggs, ant parts, and who knows how many pheromones remaining? It is back in the ziplock bag, out in the garage. I’ll figure out what to do with it later. In the meantime, another Echo arrives soon.