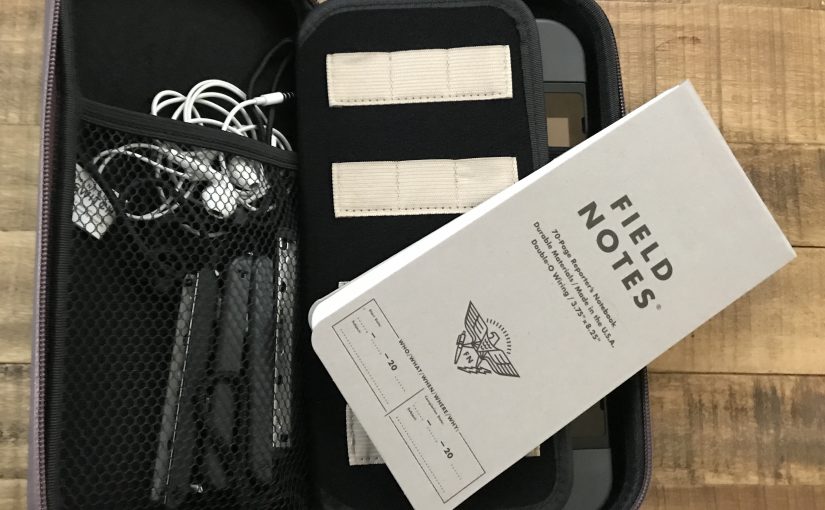 It’s no secret that I like to use paper. Just take a look at my Hipster PDA section, and my constant reliance on Field Notes notebooks for quickly jotting down ideas to deal with later. (I’m really into their Lunacy notebooks right now.) It doesn’t have the nifty editing, sharing, and text reflow that digital documents have, but it’s always good for random freeform thoughts.

I started playing Zelda last month. At roughly the same time, and entirely because I liked the style but didn’t have a specific use for it (yet!), I ordered the Field Notes Reporter’s Notebook. It turned out to be a great match!

The version of Zelda I received came with a carrying case, in the form of a Sheikah Slate (the in-game tablet computer that Link runs around with). The case is a little bulky, but has room for all sorts of accessories.

When you flip the center panel over, there is just enough room for the Reporter’s Notebook:

And while, in-game, there is a log of major- and side-quests, I always have something to keep track of. It’s usually like a shopping list, only instead of “milk, eggs, butter” it’s more like “durians, fairies, check out this weird thing I saw west of that one tower.” It also records prices of things I might want to pick up soon (typically, this is armor or seeds to collect to get another inventory slot). Some examples, with pixelated spoilers:

For me, the form factor is amazing for these kinds of lists and notes. If you’re playing Zelda, I’d highly recommend keeping some paper notes. They don’t have to be this exact format — just use whatever you have around the house.