I’ve been using a couple of different systems for note-taking over the past several years. Last month, I had meant to point a friend/coworker to a blog post describing my setup. (Hi, Dunx!) He had been using Evernote which, to put it mildly, pooped its pants, deleting much of his content. [Spoiler: he managed to save himself by unplugging the router before the deletions could propagate to one of his computers.] Unfortunately, I had no post describing my setup or workflow to point him to, so it’s time to fix that. I have a Dropbox/BitTorrent-Sync post that alludes to my note-taking, but it never got into detail.

Everything I’ve learned about productivity (note-taking, task management, and the like) is that you need one system: one spot to write that stuff down. If you have three different spiral notebooks, which one do you write your ideas in? Are they separated by topic? Home vs work? Some other scheme? Are you using Evernote and Trello together? Which one(s) gets the recipe from the website that you’d like to try baking next week? The time you spend trying to figure out where to enter the idea is friction that can eventually lead to abandoning all the systems. The time you spend searching all your resources to retrieve an idea you’ve saved somewhere is likewise aggravating.

Me? I technically have three systems for note-taking — three spots to put notes — but I have strict delineations between them. That means I don’t have to think about where to put the notes and where to find them later. 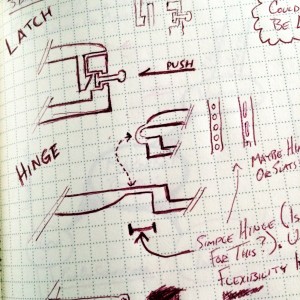 Moleskines are trendy hipster journaling notebooks, but I like them. They’re durable. The half-letter sized ones are useful — small enough for toting around, but big enough for ideas to spread across the page. I use the Evernote-branded Moleskines with dotted graph paper for pages. As an engineer, I need a grid and the dot-grid (only available in the Evernote variant) is lightweight enough to fade in the background when I’m going a little more free-form.

The paper notebook is for mapping out and playing with ideas. Lists, diagrams, mindmaps, ideas for 3D models, ideas for puzzle design, notes while solving puzzles. It’s stuff that’s a little too graphical or freeform for text files or Markdown. A lot of it isn’t too terribly lasting. It’s stuff I need to keep track of for a few days or weeks. Sometimes they mature into real projects (with real readme files to move the notes to). Sometimes they’re dropped and never thought of again. It’s all highly ephemeral, but the notebook is always within reach.

I’ve played around with using the Evernote iPhone app to capture and archive my completed notebooks. It detects the dot-grid, using that to crop, shear, and stretch the captured image so that it appears as the original flat page. It even does optical character recognition to allow easy searching. To this date I’ve never had to retrieve one of my pages from Evernote. Occasionally I’ll grab an old notebook from the shelf and look up some near-forgotten idea to revive. The Evernote app? I’m still capturing filled notebooks; maybe someday it will come in useful. 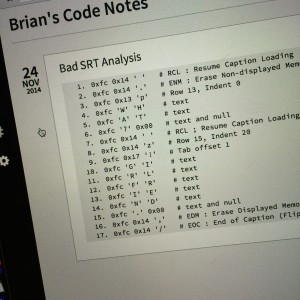 For code snippets (and related), I have a “secret” WordPress installation with the Capsule theme. I say “secret” because it’s not public; it is mostly stuff for work. It’s a special subdomain, over https, with both .htaccess passwords and WordPress credentials. The Capsule theme turns it into “a developer’s code journal.” This theme replaces the entire standard WordPress user interface. Each “blog post” becomes a separate note page. You can easily search by both text and hashtag. The content (and “post” editor) is all Github-flavored Markdown instead of HTML, which means you can easily add fenced-off code blocks that render with syntax highlighting. Most of this stuff only needs to live for a few weeks, until a feature is solid, but I keep it all around indefinitely. 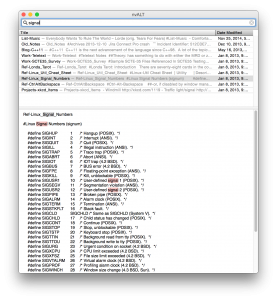 “Everything else” lives in countless text files. (I lie. The count is 524 as of this writing.) In Evernote terms, each ”note” is a separate text file. I keep them all in a Dropbox folder to sync across computers and devices. (I would be using BitTorrent Sync, except no iPhone note-taking apps support that protocol yet, so those notes remain on Dropbox.) For legacy reasons, the notes are in ~/Dropbox/Elements/. I started with an iOS app called Elements, migrated to Trunk Notes, tried a few others, and am now using Notesy on the iPhone and iPad. The original folder name stuck due to laziness. BUT the fact that I can bounce through so many different apps, yet never need to change the underlying files, is a testament to just how flexible this system is.

As I said, each note is a separate text (well technically, Markdown) file. Some are a few lines long, others are many pages. I have a scheme for file names. They’re all prefixed with a category. This lets them sort by category if I want to browse rather than search. The category prefixes include:

The content itself is a mix of short-term and long-term. I’m constantly adding and deleting blog drafts. The lists of books/movies/music have frequently-rotating content. Most everything in reference is “deep storage.” I don’t need it every day and it rarely changes, but when I do need it, it’s great to have right there. Have you ever been at the store, knowing you’re low on printer ink, but didn’t remember exactly which model of printer you have or which model of ink cartridge to buy?

This “note database” exists on nearly all my machines because it is Dropbox. I access it via different means, depending on the computer or device. On the Mac, I use nvalt, which is a variant of Notational Velocity. On Linux, I use a little script I wrote called notes. Under iOS, I use Notesy, which adapts nicely for iPhone and iPad. On Windows, I just sort of make do with Explorer or switch to the Linux box (sitting right next to it).

In conclusion, almost everything goes into Dropbox text files. The paper and pen is for doodling around with ideas. I relegate the code journal to job-related content.

I should add that anything that truly must be secure and private, such as account numbers or medical information, goes into 1Password. 1Password has a basic note-taking ability, in addition to web passwords, server credentials, and credit card numbers. Anything I wouldn’t want sitting openly in a text file must go there.

Tomorrow I will go into more detail on the app workflow of Notesy, nvalt, my notes script, and an iOS app I haven’t yet mentioned, Drafts.