One of the most useful apps I have discovered for the iPhone is called Trunk Notes.  Effectively, it is a “wiki” or series of interlinked notes, that you can carry around in your pocket.  I actually don’t use it so much for the interlinking — tagging and search are plenty enough for me — but this app really shines in two features that are certainly not available in the built-in Notes app and which are a bit rare on other apps.

The first of these two features is WiFi sharing.  When you enable this, it turns your phone into a little webserver that you can get to from your desktop browser.  This makes cutting, pasting, and larger structural edits super-easy because you have a full screen and full keyboard.  You are not constrained by the limits of the iPhone’s screen and keyboard or the multiple gestures required to copy and paste text.

The other key feature is Dropbox synchronization.  As much as I respectfully disagree with some of Dropbox’s recent moves (to the point of moving all but iPhone-synced data to SpiderOak), I have to admit that synchronization between computers and phones via Dropbox is nothing short of magical.

Trunk Notes synchronizes its contents to Dropbox as a collection of text files.  I can then search and edit those on my desktop.  Mainly I search, since it’s easier to edit on the phone or via the WiFi sharing.  I got a little bit tired of constantly running “grep” in my trunksync folder then “less” on the result, so I wrappered it in a shell script.

The script itself is called “notes” and lets you place a search term on the command line.  I can enter “notes apple” and it responds with a list of all notes mentioning the term “apple” (in upper or lowercase).

Given this list, I can then select one and bring up the content of the note with my search term highlighted. 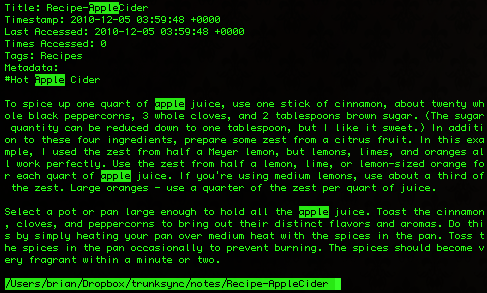 The “notes” script is a Bash shell script.  This means it will run on Unix or any Unix-like operating system.  These include the stock Linux and OS X installs.  It can also be run on Windows under the Cygwin command shell.  (The details of installing and configuring Cygwin are beyond the scope of this post.  They have some mighty fine documentation.)  To install, you just need to create the script, mark it as executable (chmod 755), and put it somewhere in your path (/usr/local/bin).  If your Dropbox folder is in a different place than your home directory or if you’re syncing with a Trunk Notes folder other than trunksync, then you’ll have to make the appropriate modifications.

The script is as follows:

One thought on “Trunk Notes lookups from the desktop”