Today Netninja.com turns 17. It’s been a long journey through several distinct phases. The early history is a little fuzzy in my mind. This little narrative is my best-effort attempt at recalling the details, to better document them for the future.

My first glimpse into webpages was at DefCon 2, the hacker convention in Las Vegas in 1994. That was after community college, just as I was getting settled in to a four-year university. I’d been using the internet (through school) for some time. It was all mailing lists, usenet groups, FTP, and gopher sites. I’d either not heard of web pages, or I had but they hadn’t registered solidly on my radar. At DefCon, there was some talk about using the internet to order pizza. The architecture was something dumb and hacked together, like a webpage hooked to a faxmodem. But I didn’t quite get it. The colon-slash-slash and all that. I hadn’t seen URIs before. They were a combination of foreign and familiar. I could see how they might be useful shorthand for ftp://example.com@username:password/folder/file.txt, but this “http” thing was new. I learned quickly. It wasn’t too log after that that I ran my own little web page from the tilde-home directory of the school’s computer. It was about as cheesy and bad as you’d expect.

Fast-forward three years. Between hacker talk and little plastic ninja toys dispensed from vending machines, “net ninja” had become a regular part of my vocabulary. In the intervening time, I had also learned a lot about writing and hosting web pages, including the fact that a normal Joe — not directly associated with an educational facility or corporation — could purchase and use a domain name. This would have been the summer leading up to DefCon 4. June 1997, specifically. I grabbed the domain name and put up a website. I don’t have any immediately available archives of that site. You can rest assured that it had a black background and horizontal rules animated with dripping blood and torches.

Since the beginning, I had a robots.txt file blocking it from being indexed by search engines (and archive.org’s wayback machine, for that matter). My line of thinking was that you had to know about the site through someone or some other site. You couldn’t just discover it on Yahoo or AltaVista. Unfortunately, that also blocked it out from being archived. I think I may still have a cvs repository somewhere around here with the early history, but it’s likely on a CD that is slowly deteriorating. Although I care enough about Netninja’s anniversary to write this post, I don’t care enough to find and dig through an old source control system. The earliest capture on archive.org was from 1998, a year and a half after start. This was the second or third major revision of the site. 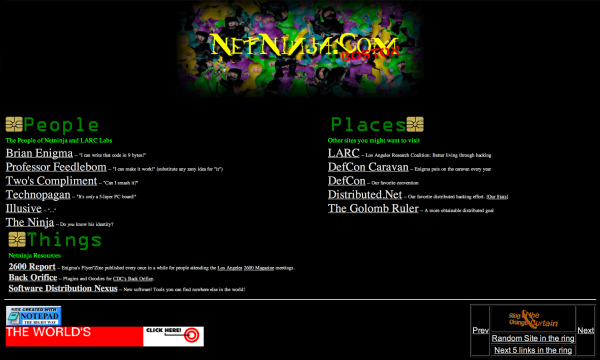 1998: black was the new black and webrings ruled the internet. The site was basically a collection of static pages. I think there might have been a little bit of PHP glue to maintain a navigation, but it was mostly hard-coded web content. The majority (or possibly entirety?) of the site was devoted to hacking and friends. You’ll note that “Brian Enigma” and “The Ninja” are two separate entries. It’s been clear in my mind from the start that they are two separate entities.  I am not “a” or “the” Netninja. Netninja is either a gumball machine toy or a mysterious entity, depending on context. And yet, the majority of email I received usually equated the two. 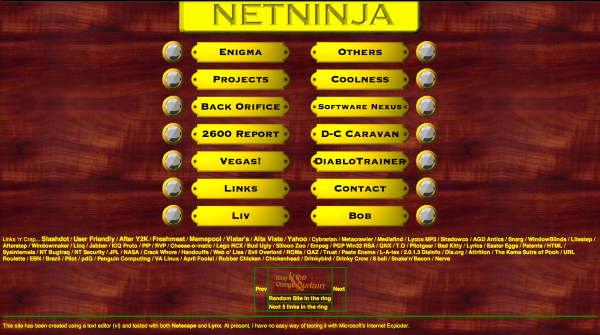 By 2000, I’d upgraded from Notepad.exe to vi. And hand-tested everything in Netscape and Lynx. Screw Internet Explorer. <hipster>You’ll note that I was steampunk before steampunk was cool.</hipster> I even 3D modeled and animated the glowing buttons myself. And yet, I hadn’t yet learned that webrings were lame. 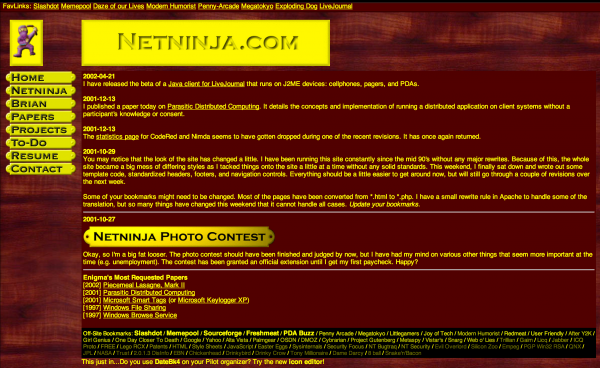 By 2002, I’d written an honest-to-goodness blogging engine. We have the same bad steampunk stylings, but all the pages switched from html to php, with a common navigation.

We go through a couple iterations of the same, 2004 and 2005, improving navigation and adding a sidebar. 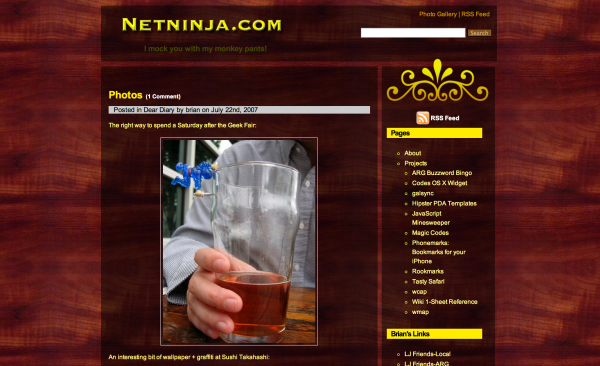 The biggest change (in infrastructure and content) was about 2007. I moved from my custom site code to running an instance of WordPress. This meant I could import a bunch of LiveJournal content (of questionable quality) going back to 2001. Typical LJ content was what I did that day, navel-gazing introspection, and angsty posts about music, movies, and television. Existing hacker-related content from the “old” site had to be manually migrated. The important stuff did, but I left a lot out. The new site format also meant it was much easier to post new content. Adding a page to my custom site framework usually involved writing HTML files that the template would pick up, possibly making changes to the template itself, and syncing the whole thing from my desktop to the website. With WordPress, of course, you just open the editor page and start typing. Easy. 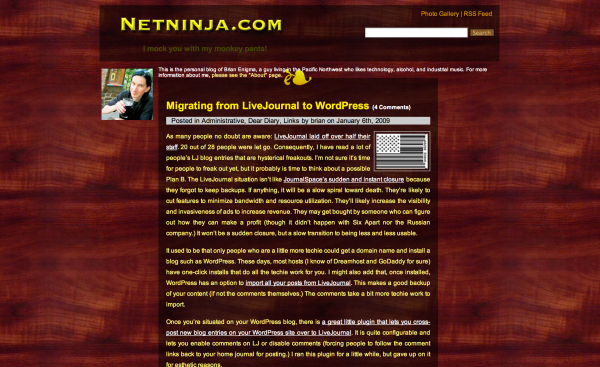 By 2009, my primary blogging engine was WordPress running on Netninja. Everything got automatically cross-posted to LiveJournal and a lot of the comment discussion lived there, but the content was mine. It lived here. I also did some template customization (though the css is a bit glitchy in the archive.org capture) to make my site feel a bit more like LiveJournal, with custom per-post user icons (such as the barcode flag here). 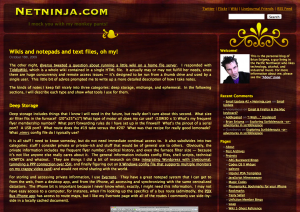 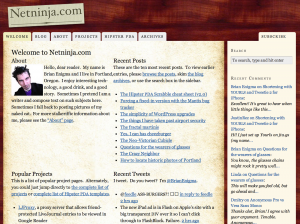 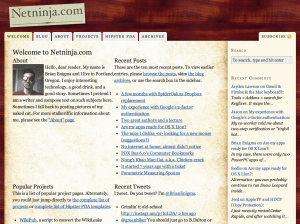 We next go through a few more wood-grain iterations while the content subtly shifts from personal diary to things other people might actually care about. That latter versions add a bit of parchment paper. 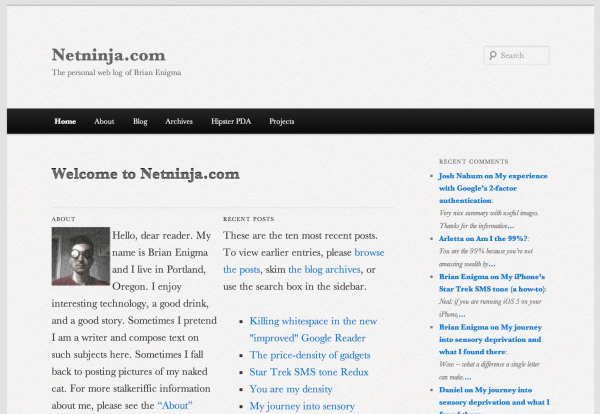 By 2011, Netninja.com is much more focused on tech and Portland and less about my daily life. We’re also in the graphic design phase I lovingly call “I can’t read this thin serif text on that Apple-inspired linen background.” 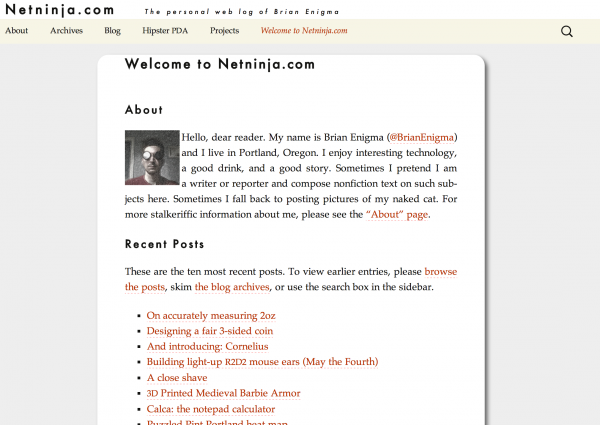 We then, of course, have today’s Netninja. And that retrospective concludes our digression back to navel-gazing.

One thought on “17 years of Netninja”