A couple of weekends ago I played Betrayal at House on the Hill with a few friends. One of the stranger features of the game are the dice. They’re 6-sided die that act as 3-sided. They have pips for 0, 1, and 2 — two faces with each value. 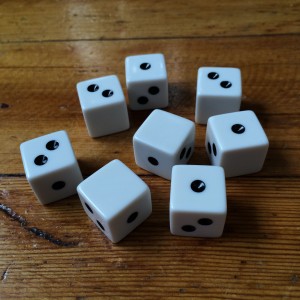 During the game, Jonathan brought up the fact that Von Neumann worked out a fair 3-sided “coin” of a different geometry that could work the same for this game. Instead of the coin being a cylinder so short you don’t think of it as a cylinder anymore, it’s extruded to have a significant height. There’s a number on each end (the heads and tails of a traditional coin) plus a third option on the now-not-insignificant edge. 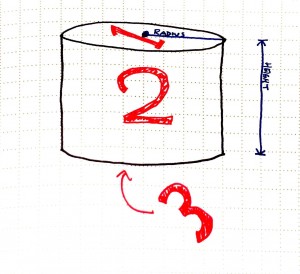 In my research, I have also run across a design that looks a little more like a Toblerone: a triangular prism that’s either so long you couldn’t land it on either end (which seems too long for a satisfying roll) or one that is a lot shorter, but whose ends taper to a point. I am going to skip this variant during this discussion. It’s trivial to see how to make this one fair: start with an equilateral triangle and extrude it to a prism.

I have intentionally only skimmed the papers that talk in detail about the design of this 3-sided coin and how to arrive at the correct ratio of diameter to height. I thought I might work it out for myself before running off to view the spoilers.

If feels like the tallest you could possibly go would be to match the diameter of the circle to its height. You effectively take a 6-sided die and lathe it down to a cylinder.

But this intuitively feels wrong. On the uniform cube of a 6-sided die, you have one face at each end, but around the outside (the edge of the cylinder in this case) are four faces. It feels like you’d have a much higher probability of hitting the edge. Looking at a 3D model, it even looks difficult  to hit either end: 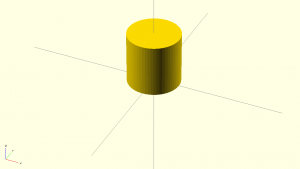 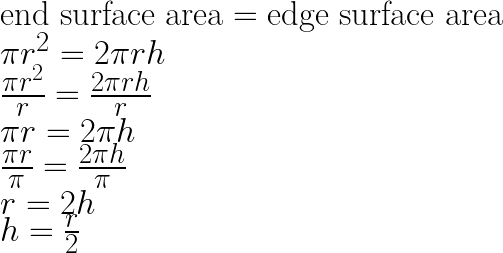 That makes the height half the radius. That’s a quarter of the diameter. Intuitively, that feels pretty darn short. In fact, it feels like the shortest possible extreme. In a 3D render, the edges look impossible to hit, like more of a 2-sided coin than a 3-sided one: 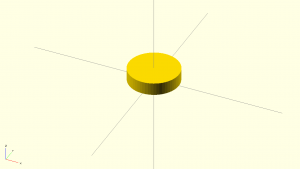