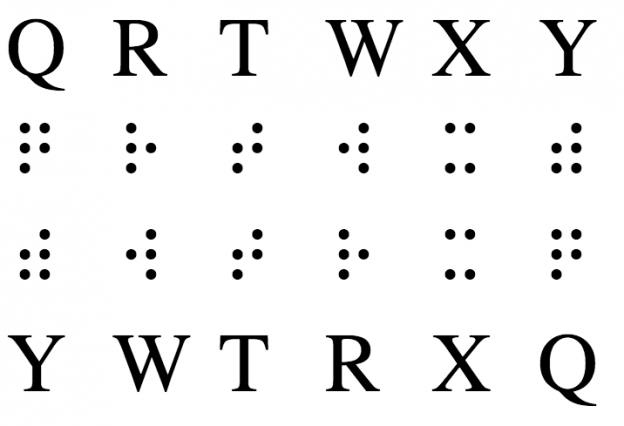 Last week I posted “Use the best available braille” as an intro to an online braille generator I wrote.  This sparked off a conversation with a friend about the possibility of interpreting braille upside-down.  Writing an ambigram in braille sounded like such a neat idea I wrote a note to myself to explore it later.  Well, today is later, so I set out to see whether it could be done.

This interpretation is a very rigid interpretation of the dot patterns.  Right-side-up and upside-down are perfect 180° rotations from one another.  A dot in the top right corner ends up in the bottom left corner.  Unfortunately, the results are pretty bad, yielding some horrible letters.

Or, if we trim it down to just the relevant letters: 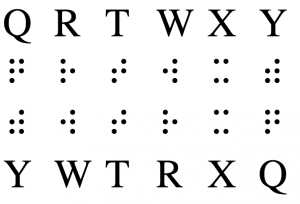 One realm I have not yet explored is letters that are imperfect grid matches.  If we were to be a little more loose about our letter baselines, there are a few letters that are shape-wise rotations of one another, but the rotation would not not end up on a line that technically counts as a letter.  For instance with this imperfect matching, you can see that G is a rotation of itself, H and D are rotations from one another, J and F are rotations, E and I are rotations.  You could maybe get away with saying B, K, and L are each rotations of themselves.  This letter collection is less awful and opens up some letter opportunities that I may explore at a later time.